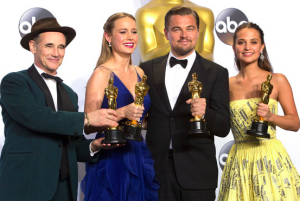 Between the end of the Super Bowl and the start of March Madness, there’s usually a little lull in sports betting. Fortunately, the Academy Awards are there to help fill the void. Whether it’s prop bets on the night’s festivities and fashion or predicting what films will take home the major awards, the Oscars is a great event for placing bets. Here is your official betting guide to the 89th Academy Awards, taking place on February 26.

This is a difficult race to handicap, with several films receiving quite a lot of hype. Both La La Land and Moonlight took home Best Picture awards at the Golden Globes, the former in the Musical or Comedy category and the latter for Drama. Hidden Figures and Manchester By the Sea have both received an awful lot of attention as well, making them legitimate contenders.

The smart money here is on Damien Chazelle for La La Land, although Barry Jenkins for Moonlight is a trendy pick for some. Oddly enough, those two are the least heralded of the five nominees with regard to being nominated for major awards.

Kenneth Lonergan, Manchester By the Sea – 10 to 1

There’s been so much hype surround Casey Affleck that it’d be hard to bet against him. That being said, there does appear to be plenty of support for two-time Oscar winner Denzel Washington. Andrew Garfield is also an interesting dark horse candidate.

Casey Affleck, Manchester By the Sea – 4 to 7

As hard as it is to believe, three-time Oscar winner Meryl Streep is a long shot to win this year. Emma Stone and Isabelle Huppert are the favorites after winning at the Golden Globes last month. But Natalie Portman should not be counted out, as she goes for her second win in this category for her portrayal of former first lady Jackie Kennedy.

Interestingly, the Golden Globe winner in this category, Aaron Taylor-Johnson, is not nominated for an Oscar, making this award wide open. Mahershala Ali took home Best Supporting Actor at the SAG awards, but that’s not necessarily an indication of how Oscar voters will lean. Ali may be the favorite, but Michael Shannon and Jeff Bridges both have great pedigree, while Dev Patel is an intriguing dark horse candidate.

This category is absolutely loaded this year, with two previous Oscar winners and two more women with multiple Oscar nominations. This could finally be the year for Viola Davis, who appears to be the heavy favorite. But Naomie Harris could be a surprise winner, and some Oscar voters may be tired of nominating Michelle Williams without her getting a win, so she should be taken seriously as well.

Michelle Williams, Manchester By the Sea – 10 to 1

Zootopia is the heavy favorite for best animated film, and for good reason. But Moana is a possible dark horse after the rave reviews it received last year. The other film to be aware of in this category is Kubo and the Two Strings, which also received a nomination for Best Visual Effects.

If you’ve never placed bets on the Academy Awards before, now is not a bad time to start. If nothing else, it makes the show far more interesting to watch.