Posted on December 31, 2016 by Bryan Zarpentine 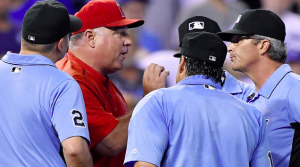 It’s New Year’s Eve, and presumably there are a lot of people looking forward to flipping the calendar and staying goodbye to 2016. Of course, some will be more eager to do that than others, and that includes many in the sports world. This was a trying and difficult year for quite a few teams in baseball, especially those experiencing a lot of losing while going through a long rebuilding process. But here are five MLB teams that will be particularly happy to see 2016 finally come to an end.

Injuries, particularly to the pitching staff, just kept coming and coming for the Angels in 2016. The team ended up using 15 different starting pitchers in 2016, and actually could have put together a pretty solid rotation using only the pitchers who spent most, if not all, of the season on the DL. The end result was a team that finished 14 games under .500 and 15 games out of first place in the AL West. There was little the Angels could have done differently with all their injuries, which is why they’ll be eager to put 2016 behind them, forget about it completely, and try again in 2017.

After all the bold moves the Diamondbacks made last offseason, 2016 was supposed to be their year to finally make some noise and compete with the big boys in the NL West. Alas, that was not the case, as many of their bold trades and signings did not pan out as they were hoping. Once again, the Diamondbacks were a second-division team just playing out the season, hoping to avoid a last place finish. Of course, Arizona did finish one game ahead of the Padres to stay out of the NL West basemen, but that was little consolation in a year that began with such high hopes.

No professional sports franchise had a worse year off the field in 2016 than the Marlins. The sudden and tragic loss of Jose Fernandez has left a permanent scar on Miami’s 2016 season and the entire organization. The Marlins may never fully recover from the loss of Fernandez, but turning the page into 2017 may help them to put a year behind them that was memorable for all the wrong reasons.

After years of steady progress and three straight playoff appearances, the small-market Pirates took a step backwards in 2016, finishing under .500 and watching the division-rival Cubs break their long World Series drought. A disappointing year from star player Andrew McCutchen derailed their season, while several of their moves from last winter didn’t quite pan out. Pittsburgh is still in good shape heading into 2017, which is even more reason why they should be eager to move past 2016.

Anytime you lose 103 games, it’s going to be a year to forget, and such was the case with the Twins in 2016. Minnesota began 2016 by losing its first nine games, which more or less sums up how the rest of the year went. What hurt the most is that the Twins didn’t enter 2016 as a rebuilding team that knew it was in for a long season; at the start of the year, the team had hopes to compete for a playoff spot. But less than two weeks after it started, Minnesota’s season became a nightmare, making the Twins eager to pretend as if 2016 never happened.