Expectations were not high for the opening game of the NFL postseason Saturday afternoon. The Houston Texans didn’t inspire confidence with Brock Osweiler at the helm. Oakland didn’t inspire much either with third-string rookie quarterback Connor Cook making his first career start—the first in the Super Bowl Era to do so in the postseason.

Many tried to say that Connor Cook’s big game experience in college would translate to the NFL and he would be fine. If he were playing the Cleveland Browns in the season opener (like Carson Wentz did for his debut) maybe he would have been. 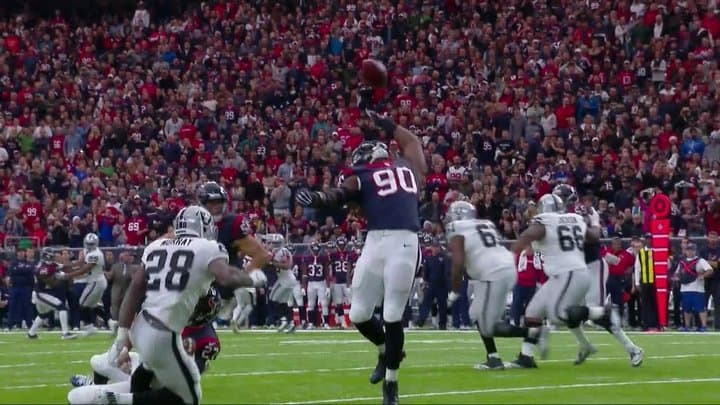 The game wasn’t all bad for Cook; but there was certainly more bad than good. He completed 18 of 45 passes on the day for 161 yards, one touchdown, and three interceptions—the first of which came on the Raiders second drive of the game at the hands of Jadaveon Clowney.

It was the first of his career—required him to tip it up a few times before he caught it–and set the offense up on the Oakland four-yard line (after a penalty was marched off). Lamar Miller ran it on the next play and even though they had only gained 12-yards of offense, the Texans were up 10-0.

“We practice it every day! It usually goes the same, I tip it three times,” Clowney joked after the game. “I usually score, though. I didn’t get to score. I left that part out.”

For a brief moment, late in the first quarter, Raiders fans were given reason to hope for a happy ending. After a nice punt return set the Raiders offense up on the Houston 38-yard line, Cook took the team on a quick, five-play touchdown drive to close the gap to 13-7.

The Texans defense rebounded well from the drive and held the Raiders to a single first down and just 24-yards of offense for the rest of the half. Houston scored another touchdown before the end of the half to make the score at halftime 20-7, Texans. 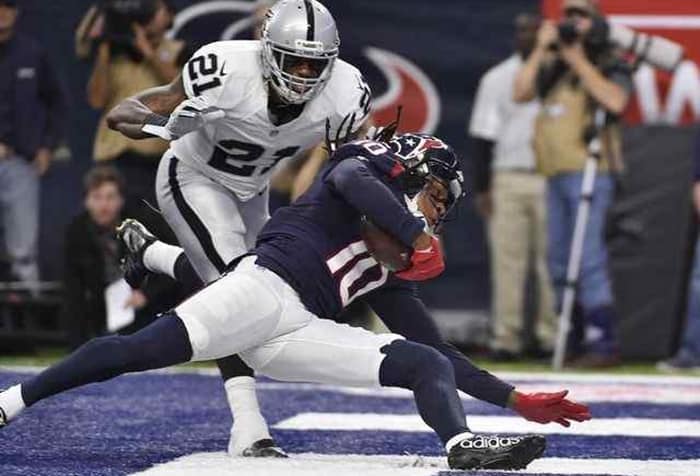 During Bill O’Brien’s tenure as head coach, the Texans had never lost a game it was leading at halftime, but for most of the third quarter, it was hard to tell if that was going to be the case here. A 13-point lead is nothing for a team with Oakland’s scoring potential. Yes, Cook did not have near the mastery over the offense as Derek Carr, but all it would take for the game to change was a couple of broken plays by the Houston defense.

Houston’s defense let the Raiders back in the game in Mexico. What’s to say it couldn’t happen here?

Surprisingly, it was Brock Osweiler that had something to say about it.

With a 13-point lead heading into the fourth quarter, the Raiders could still mount a comeback. All it would take would be another Osweiler interception and a couple of big plays by Oakland’s playmakers. But when Osweiler finished off a drive with a one-yard run into the end zone to give Houston its largest lead of the season, 27-7, the game was all but won.

Osweiler would finish the day with 14 completions off 25 attempts for 168 yards and a touchdown, most of which came in the first half (12-18 for 146 yards). O’Brien, likely fearing a game-changing mistake, became ultra-conservative in the second half choosing to let the defense carry the team the rest of the way—and they did.

After falling behind by 20, Cook seemed to find some rhythm finally and managed to guide the Raiders on a nice 11-play drive that ended with an eight-yard touchdown pass to Andre Holmes. But his last two drives each ended with interceptions that secured Houston’s 27-14 win. Osweiler had his third game in a row without a turnover, Lamar Miller had 73 yards and a touchdown on the ground, and the defense lived up to its billing (allowed 203 total yards, forced three turnovers, and sacked Cook three times). 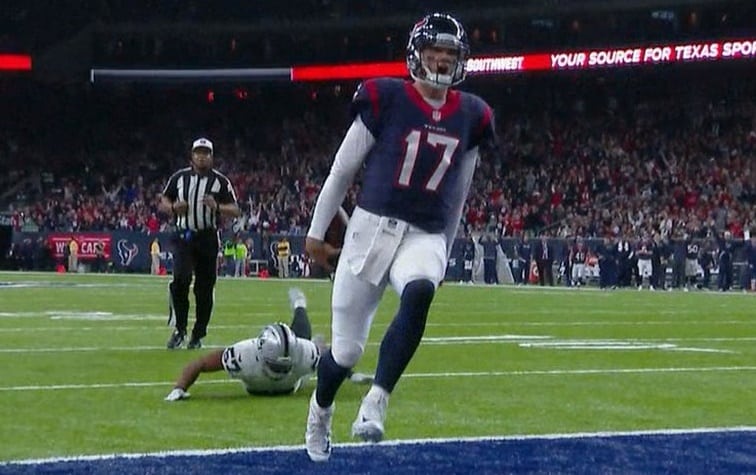 Winning the wild card is great, but the Texans will have a hard time making it past the next round. If Pittsburgh beats Miami, they will head to New England where things did not go well earlier this season against the Patriots third team quarterback. Should Miami pull off the upset, the Texans will travel to Kansas City to take on the Chiefs (who they beat in Houston Earlier this season).