Posted on December 21, 2016 by Bryan Zarpentine 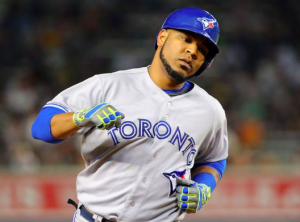 Edwin Encarnacion remains arguably the top hitter still left on the free agent market. There is a long list of potential suitors that could still sign Encarnacion, but his agent, Paul Kinzer, says that the Toronto Blue Jays won’t be one of them. In a radio interview Wednesday, Kinzer all but closed the door on Encarnacion signing with the Blue Jays.

Kinzer explained that Encarnacion’s preference all along has been to return to Toronto. Of course, the Blue Jays made a four-year, $80 million offer to Encarnacion early in the offseason, but Kinzer says the timing of the offer prevented Encarnacion from accepting. The agent says that Toronto made the offer on the eve of free agency beginning, at which point Encarnacion wanted to at least explore his options and see what other teams would be interested in him.

When Encarnacion wasn’t quick to accept that four-year offer from the Blue Jays, the team moved on to other options, quickly signing DH Kendrys Morales. Kinzer admits that he was surprised the Blue Jays went after Morales so soon after Encarnacion declined their offer. “We weren’t expecting them to move so quickly,” he said, explaining, “we weren’t going to make a move without talking to the Blue Jays.”

It seems that had Encarnacion received offers from other teams, he would have given the Blue Jays a chance to match or beat that offer. However, Toronto didn’t appear to be on the same page, as they moved to sign Morales without first notifying Encarnacion that they were going in another direction. When the Blue Jays later signed Steve Pearce, Kinzer says: “We felt like the door was pretty much closed,” adding that there were no hard feelings between Encarnacion and the Blue Jays, perhaps just some disappointment that he won’t be returning to Toronto.

Kinzer adds that Encarnacion isn’t upset at still being unsigned at this point in the offseason, despite entering the offseason as one of the top power hitters on the market. “He doesn’t get excited. It will work out,” Kinzer said. “The only thing now is the realization has started to sink in that he won’t be a Blue Jay. That’s been a little frustrating because that was always his goal.” Kinzer adds that Encarnacion had hopes of finishing his career with the Blue Jays and having his number retired in Toronto one day.

As it stands now, Kinzer says Encarnacion has offers from six different teams, mostly three-year deals, but with a couple four-year offers mixed in as well. He didn’t name specific teams, but both National League and American League teams are involved. Kinzer believes that Encarnacion stands out from the other power hitters that remain on the market, but that the other options available to teams have held up the works with regard to Encarnacion signing with a team.

The latest rumors indicate that the Cleveland Indians are “pulling out all the stops” for Encarnacion, implying they are serious about signing him. However, the Indians have reportedly made offers to several of the other sluggers still available on the market, and they could decide that the player they want the most is the first player to say “yes” to them. Right now, there’s no indication that Encarnacion is close to signing with the Indians or any other team, but one thing that seems all but certain is that he will not be back with the Blue Jays in 2017.