Posted on December 3 2016 by Bryan Zarpentine 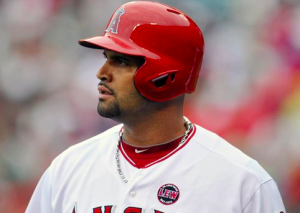 The Los Angeles Angels were bit by the injury bug as much as any other team in baseball in 2016, and injuries have already started to have an impact on their 2017 season. The Angels announced on Friday that DH Albert Pujols has undergone surgery on his right foot to “release his plantar fascia.” The recovery time is an estimated four months, which will put his availability for opening day in jeopardy.

The Angels say the surgery was not necessary at the end of the season. However, in recent weeks, Pujols began to feel increased levels of pain in his foot. His other option would have been to wait 10 more weeks, at which point he still may have needed the surgery, keeping him out for the entire first half of 2017. Throughout his career, Pujols has been known to recover quickly from injuries, but whether the soon-to-be 37-year old can come back from this ahead of schedule remains to be seen.

Angels GM Billy Eppler said the problem with his plantar fascia affected Pujols during the second half of the 2016 season, but he was able to play through it, hitting .268 with 31 home runs and 119 RBIs. It was one of his better seasons during his five years with the Angels, but there’s no denying Pujols is a shadow of the player he was during his time with the St. Louis Cardinals.

Eppler describes the timeline for a return from this surgery as three months without any baseball activity, followed by another month of rehab work before playing in games. That timeline puts Pujols on pace to play in games around the start of the regular season. He would presumably need to play games at the minor league level to simulate spring training games, meaning he is unlikely to be with the Angels on opening day.

“He’s at that point in his career where he’s keenly aware of what’s happening with his body,” Eppler said about Pujols. “I don’t put the timetable on Albert like you would with your younger players. We’ll just see in Albert’s case, as he progresses, what his timetable is.”

Of course, Pujols is no stranger to foot problems. He had plantar fasciitis in his left foot in 2013, an injury that ultimately ended his season early. He also underwent a different foot surgery last offseason, although it did not prevent him from returning in time for opening day.

The fact that Pujols primarily plays as a DH should help him get back on the field a little sooner, as he can limit the stress he puts on his foot. Until he returns, the Angels are likely to have C.J. Cron and Jefry Marte share the duties at first base and the DH spot.

Of course, even more than missing him for a few weeks at the start of 2017, the injury to Pujols is a signal that his body is starting to break down. He has five years and $140 million left on his contract, and the Angels can only hope this issue is not a sign of things to come for Pujols.