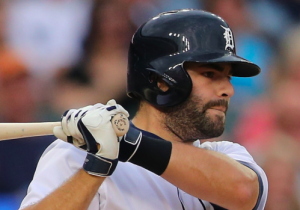 After a one-year hiatus, catcher Alex Avila is returning to the Detroit Tigers. Avila, who is the son of Tigers GM Al Avila, spent his entire pro career with the Tigers until leaving in free agency last winter and signing a one-year deal with the Chicago White Sox. He is now heading back to Detroit after agreeing to a one-year deal with his father and the Tigers for a reported $2 million.

Alex Avila hit a career-low .191 in 2015, and so his father was put in the unusual position of letting him sign elsewhere in free agency. However, his year away from Detroit with the White Sox didn’t go much better, once again leaving him looking for a job on the free agent market. Avila hit just .213 in 2016, playing in just 57 games, as he had two separate stints on the DL due to an injured hamstring.

“For me, it was a bit of a mixed bag,” Avila said of his year away from Detroit with the White Sox. “The hamstring injury kind of lingered. The times I was on the field, I had a few stretches where I was really productive and able to get on base and play some good baseball. I had a great time in Chicago. It’s a great organization, good people over there. I wish it would’ve turned out a little bit differently.”

Avila figures to be the backup to Detroit’s starting catcher James McCann, a role he also filled for the Tigers in 2015. Of course, considering McCann’s struggles against right-handed pitching last season (.201 average with an OPS of .511), Avila may have a chance to make Detroit’s catching situation a straight platoon, which would likely give him a majority of the playing time over McCann.

“Alex provides us with the needed depth at the catching position,” GM Al Avila said in a statement after the club agreed to terms with his son.

“Alex is a left-handed hitter who has some pop in his bat,” added Tigers manager Brad Ausmus. “We like his ability to catch and throw, his familiarity with the organization and his leadership qualities, which makes him an asset to the ball club.”

Avila also appears happy to be back with the Tigers. “I couldn’t sleep because I was so excited,” he said of recent days when talks began to pick up between his representatives and the Tigers, signaling an inevitable return to Detroit.

Oddly enough, Avila is the first player to sign a major league contract with the Tigers this winter. GM Al Avila said early in the offseason that changes were coming, implying the team was open to trading many of its core players in an effort to lower payroll and field a much younger team. However, outside of trading outfielder Cameron Maybin to the Angels, the Tigers are yet to make any meaningful moves.

Barring any other moves, the Tigers still have the core of their team together and look good on paper heading into 2017. Detroit finished just 2.5 games out of a wild card spot last season, and so any addition, including the return of Avila, has a chance to make a meaningful difference in the standings. However, it remains to be seen what kind of moves Avila the GM may have up his sleeve this winter aside from re-signing his son.