Another Outfield Injury for Red Sox, Chris Young to DL 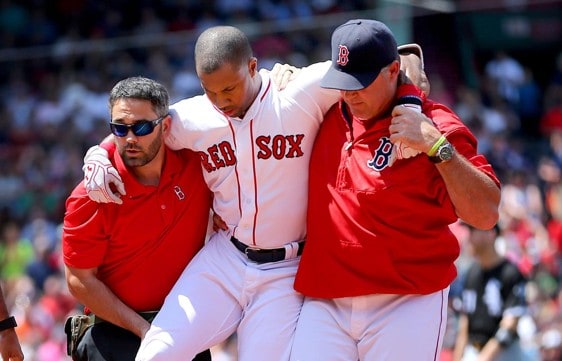 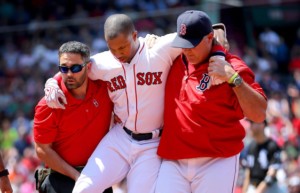 The injuries to the Boston Red Sox outfield just keep on coming. Veteran Chris Young has joined Blake Swihart and Brock Holt on the DL after suffering a hamstring injury during Thursday’s win against the Chicago White Sox. The Red Sox have struggled to find a permanent solution in left field this season because of the slew of injuries, and that search will continue with yet another candidate going down with an injury after Young left the second inning of Thursday’s game.

Ryan LaMarre replaced Young after he left the game and could be an option to play left field until one of the team’s outfielders returns from the DL. However, the 27-year old LaMarre has little big league experience and has had little success in that time. Bryce Brentz is another option for the Red Sox. Brentz had eight hits in 26 at bats with the Red Sox earlier this season.

A week ago, the top candidate to replace Young in left field would have been Rusney Castillo, but that was before the Red Sox designated him for assignment in order to take him off the 40-man roster. It seems unlikely that Boston would bring him back to the big leagues so soon after taking the first step towards parting ways with Castillo, who has been perpetually disappointing during his big league career.

The Red Sox have not announced a corresponding move to placing Young on the DL, but they hope that Holt will be able to return soon, possibly within the next few days. Holt went to the DL with a concussion more than a month ago, but started playing in minor league rehab games on Monday. However, the Red Sox report that he’s still experiencing some lingering effects of the concussion, and so the team may not want to rush him back to the majors, even with a more pressing need created by Young’s injury.

Swihart, on the other hand, is eligible to come off the DL at any time after spraining his ankle earlier this month, but his return to the Red Sox is not yet imminent. Before Thursday’s game, Boston manager John Farrell reported that Swihart is moving his ankle from a boot to a brace, which he says is progress, but Swihart is not yet to the point of swinging a bat, so he is still a ways away from helping the Red Sox.

The Red Sox have managed to get by this year with the combination of Young, Holt, and Swihart in left field, but it must be frustrating to see all three on the DL at the same time. Young, in particular, is in the midst of one of his best seasons, but a hamstring injury at his age could keep him on the shelf for a significant chunk of the season. The team is hopeful Holt can return soon, but until that happens, Boston will be at a loss for left fielders and can only hope that eventually injuries at that position stop occurring.