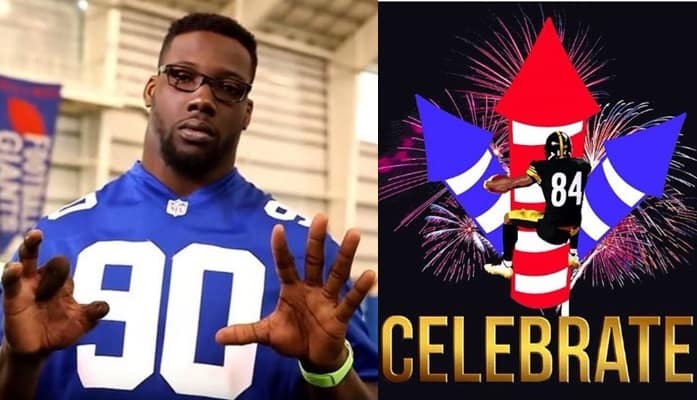 Pittsburgh Steelers wide receiver Antonio Brown is the best in the business. If there is one wide receiver every quarterback in the NFL would love to have on his team, it would be him. Had he been healthy enough to play against Denver in the playoffs last year Peyton Manning might not have walked away with his second Super Bowl win.

Yes, he has that kind of impact.

But on social media he normally has a minimal impact. He doesn’t post things around the clock like some guys do or start beefs with other players or media types. The worst thing he has done was call Cincinnati Bengals linebacker Vontaze Burfict, an idiot.

That is, until the Fourth of July.

He didn’t mean to do anything, but the internet being what it is, made treated an innocent tweet like it was much more than he intended:

Hmm…Fourth of July…Fireworks…Missing fingers…Could he possibly be referring to someone who had a little accident with fireworks last year on Independence Day?

Brown has no history of trolling or making fun of anyone, so it is highly unlikely that he intended to troll New York Giants defensive lineman Jason Pierre-Paul who as lost for most of the season last year after a fireworks accident cost him a couple of fingers.

He did, however, do something worthwhile before heading to wherever he went. Paul recorded a public service announcement encouraging people to keep fireworks away from kids and leave them to the professionals.

While he was widely ridiculed after his accident, fireworks-related accidents did cause 11 deaths in 2015 and close to 12,000 injuries that needed emergency room care.

After his tweet was up for about an hour, Brown went back to clarify the intention behind his original tweet:

I’m not throwing shade or calling anyone out. Just saying be safe while acknowledging a common injury if you’re not careful. C’mon now.

His rebuttal tweet didn’t get nearly as much attention as the first one of course, but the internet always wants to believe worst—even when it comes to one of the good guys.

As it turns out, at least one professional athlete did need a reminder not to mess around when it comes to fireworks. TMZ has posted a video of Los Angeles Lakers star Nick Young picking up some fireworks and holding them overhead after it was lit.

People can be heard yelling at him in the video when he picked it up. Sure enough–it didn’t shoot up and look cool like he thought it would, but he got lucky and escaped the incident injury-free.