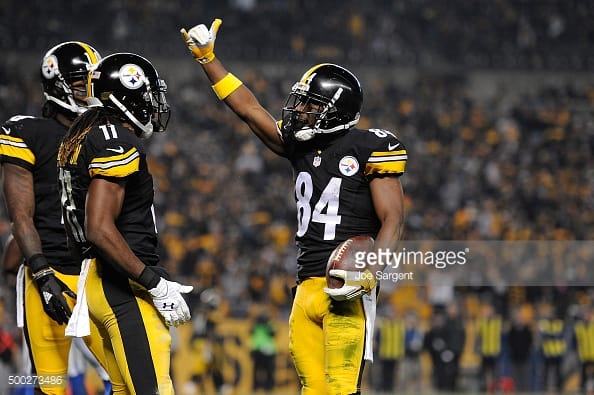 Pittsburgh Steelers wide receiver Antonio Brown has proven himself to be an exceptional talent. Over the last three years, he has made legions of Steelers fans happy as well as countless fantasy football players. With 110, 129, and 136 receptions in the last three seasons, it is easy to see why.

And he’s only getting better.

The chemistry between him and quarterback Ben Roethlisberger is unmistakable. Defenses have yet to find an answer for him, and his production does not seem to be hurt by the running game or from other receivers. The only thing that has affected it has been Ben Roethlisberger’s health.

Last season, Roethlisberger and Brown played together in just 12 games. In those games, Brown nearly averaged ten receptions a contest. At that pace, he would have shattered Harrison’s record last season.

Should the duo remain healthy next season, there is no reason to think it will not happen then.  So—could we really see a record-breaking season next year for Brown? There are plenty of factors that could work in his favor.

Last year, the only thing that was able to slow him down (besides the absence of Roethlisberger) was Richard Sherman (six catches, 51 yards). This season, the toughest guy he is expected to face is New England Patriots defensive back Malcolm Brown—whom he torched for nine receptions, 133 yards, and a touchdown last season.

There will be some who will speculate that the absence of deep threat Martavis Bryant may hurt, but Brown has performed well for the last three seasons regardless of who lines up on the other side of the field or at running back.

Ben Roethlisberger has commented on how he hopes one of the young guys will step up next season. Markus Wheaton has shown some potential and the team is hopeful that former Auburn wide receiver will step up. If they do, it is unlikely that they will take anything away from Brown with Martavis Bryant out for the year and tight end Heath Miller retiring.

So no one is likely going to take reps away from Brown, but what if the Steelers get out to an early lead and try to run the clock out?

That is a common practice among NFL teams with capable running backs, and the Steelers do have a pair of good ones in Le’Veon Bell and DeAngelo Williams. However, cornerback William Gay will be the only member of the secondary with any considerable experience next season.

With the growing pains the secondary will probably go through, the Steelers will likely need to lean on the offense to outscore teams.

For Antonio Brown’s fantasy owners, that means they will not have to worry about their man not getting his touches.