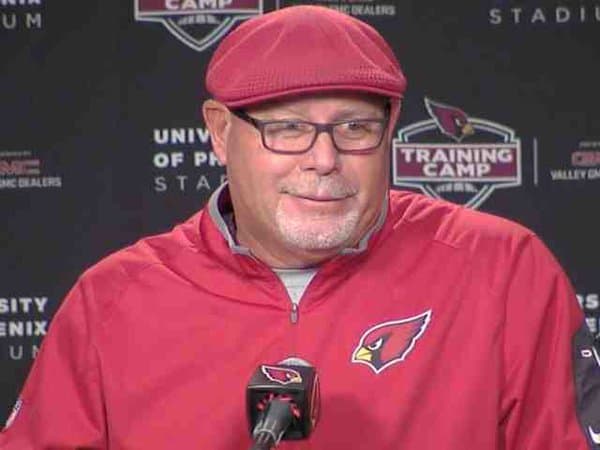 The Amazon Prime series “All or Nothing,” which focuses on the Arizona Cardinals 2015 season, has shown fans a side of Cardinals head coach Bruce Arians that they probably didn’t know.

After watching his offenses succeed in Pittsburgh, they already knew he was good at his job. His time in Indianapolis proved he had head coach potential, and during his short tenure with the Cardinals, he has proven himself to be one of the best in the business.

Ask his players and they will tell you that he is a stern taskmaster that demands the best out of you every moment you are on the field—practice or game.

Oh—and don’t take his parking space. That is if you don’t want to get cut. Former practice squad player, Lawrence Okoye did, and he ended up getting cut.

Okoye, a former British Olympian, broke into the NFL with the San Francisco 49ers after putting on a stellar performance at the super regional combine in Dallas in 2013. The 6’6” 304 pound Okoye proved himself to be a tremendous athlete with a lot of potential. San Francisco liked him enough to keep on their practice squad roster for a couple of seasons, but let him go before the 2015 season. The Cardinals picked him up a week later but then cut him during the season (October 21).

As viewers of “All or Nothing” have learned, it was because, for some stupid reason, he parked in the head coaches parking space for a couple of days.

Arians recognized that Okoye is a talented, intelligent guy, but he screwed up. He had told the players weeks earlier not to park anywhere not designated for players. Okoye didn’t heed the warning, so he paid the price.

Petty? Yeah—but when you break the rules, you have to pay the price (beyond getting your car out of the impound lot after it gets towed).

Had Okoye been a starter or even someone that had been part of the rotation on the defensive line he probably wouldn’t have been cut, but since he was just a practice squad guy, Arians went ahead and dropped the hammer on him.

Don’t feel sorry for Okoye though. In the long-run, it may have been the best thing that could have happened to him.

He went from the Cardinals practice squad to the New York Jets practice squad a couple of weeks later. On June 1 the Jets let him go, but a week later he landed a new job with the Dallas Cowboys. With the drug problem the Cowboys defensive line has (Randy Gregory and Demarcus Lawrence are suspended for the first four games of the season) he may finally get a chance to play in a game.

So parking in Bruce Arians’ spot could end up being the best move he could have made for his NFL career.