Army-Navy Game Recap: Talk About Something That Was A Long Time Coming

President-elect Donald Trump attended the 117th Army-Navy game Saturday afternoon, and like with everything involving him, people have found a way to use his attendance—more so something he said while at the game—to make him look bad. During the second half, he spent a little time in the booth with CBS announcers Verne Lundquist and Gary Danielson. While there, he did what the cool kids refer to these days as “throw shade” at the game.

“I mean, I don’t know if it is necessarily the best football,” Trump said. “But it is very good. But boy do they have spirit, more than anybody.” 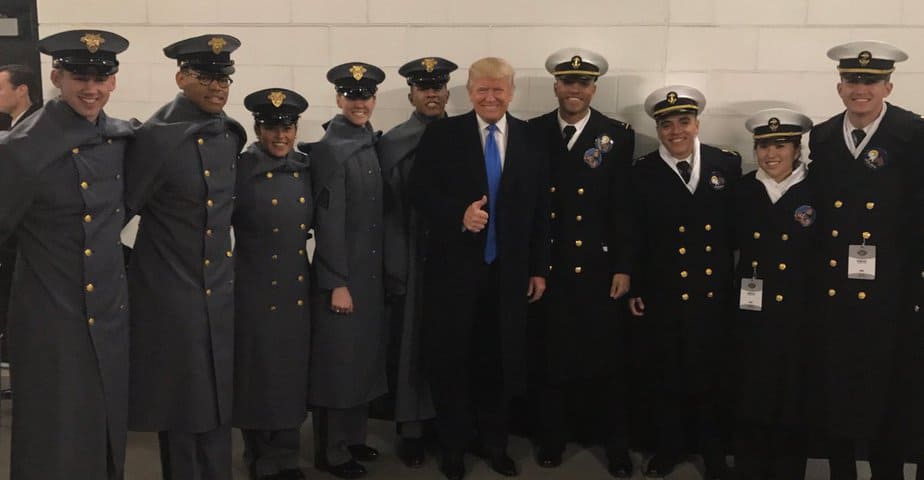 Try as some might, to take offense at Trump referring to the game not “necessarily the best football,” the truth of the matter is he was right. The game was a very exciting one and definitely one of the best between the two long-time rivals in years, but between the two they had seven turnovers—four by the winning team–and only generated 552 yards of offense and 38 points.

It is easy to see why someone would say it was not necessarily the best football—but an argument could also be made for the game being a perfect example of what is great about college football.

Trump referred to the spirit of the two sides during the broadcast, and it is that passion—from the fans, players, and coaches—that used to be what college football was all about. It wasn’t about whether a true national champion was being crowned at the end of the season. It was all about the love of the game, fans loving the team, players loving to play for each other, and a coach that loved coaching them.

When it comes to the service academies, for the coaches, it is a lot more about the love of the job than it is for coaches at most programs. Every year, Alabama is going to have plenty of 5-star ad 4-star recruits on the roster. Nick Saban is going to have the best of the best high school across the nation have to offer. The coaches at Army and Navy don’t have that luxury.

The Army-Navy game isn’t played by a bunch of highly recruited 4-star and 5-star high school demigods. According to 247Sports, neither program has recruited anyone higher than a 3-star since 2000. 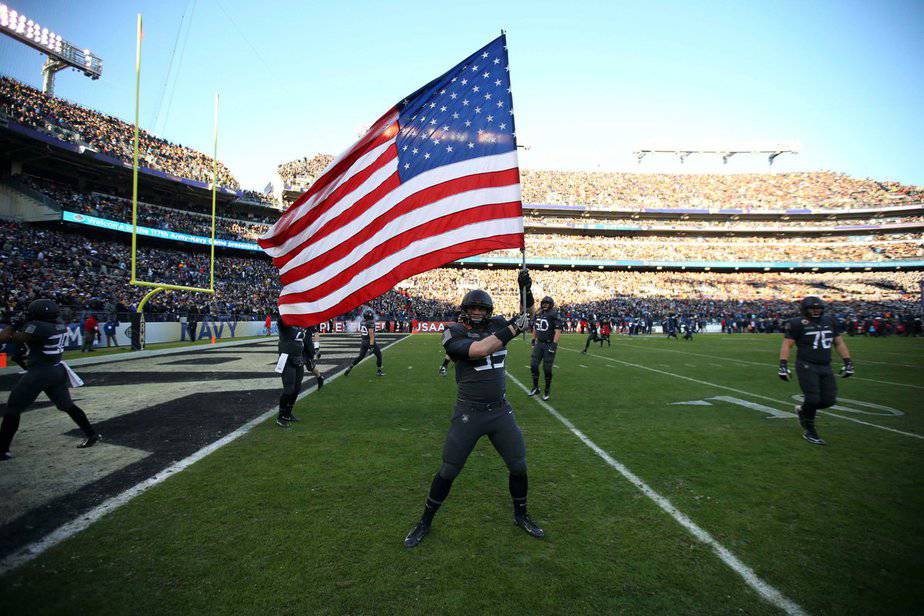 Army and Navy field a team of young men that want to play a little more football before dedicating their lives to protecting the country. They aren’t looking for fame or to get on television or make money in the NFL. They just want to play for the love of the game and everything it represents. You know—like the value of hard work, a never-say-die attitude, teamwork, and respect for your opponent as well as your own team (and the game).

You don’t see opponents helping each other off the turf very often, but it occurred several times during Saturday’s game.

That passion each team has translated into a desire to beat their hated rival that is unmatched in the world of sports. That is not to say that Michigan didn’t want to end its losing streak to Michigan State anymore or less than Army wanted to beat Navy and bring an end to the 14-year losing streak, but this rivalry does mean a little more to the two teams involved.

These guys are not just playing for themselves, the student body, or alumni, but for the thousands of men and women serving in their respective branch of the Armed Forces prepared to defend the nation’s right to spend four hours on Saturday watching a bunch of grown men play a kid’s game.

It’s more than just love of the game and teammates. It’s love of country and for their fellow soldier that they will soon be joining upon graduation. They don’t worry about draft status; they worry about making that private on patrol in Afghanistan proud.

Both teams certainly gave their branch of the service a lot to be proud of.

Heading into Saturday’s game, Navy was already behind the proverbial 8-ball since they were being forced to play a guy who was considered the third-string quarterback at the beginning of the season. Zach Abbey had to come off the bench after Will Worth (who replaced Tago Smith against Fordham) broke his foot against Temple last week. 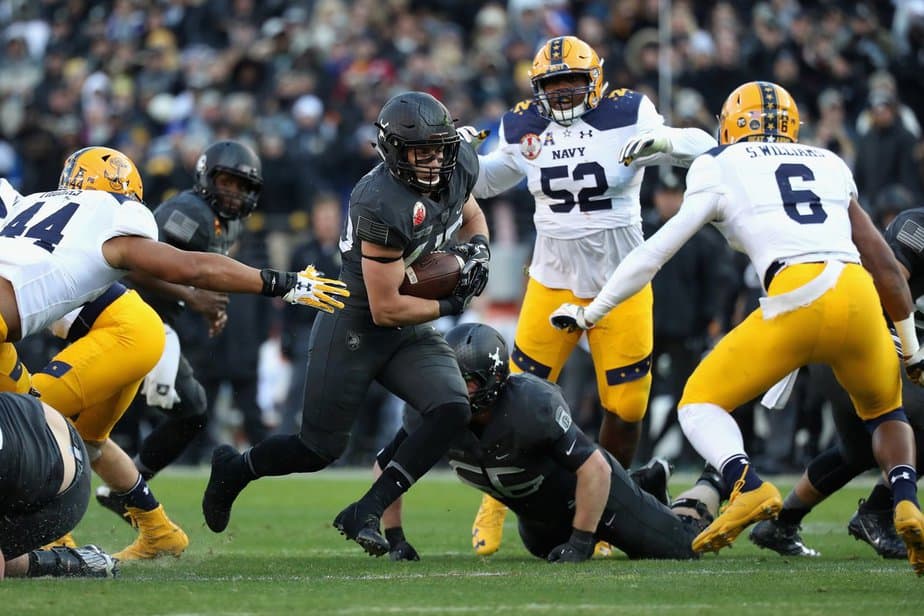 Thanks to playing in their conference championship last week, Abbey only had one week to prepare while Army had been off for three weeks leading into the game—and you could tell. Abbey struggled to get the Navy offense moving in the first half against a very good Army defense. When halftime mercifully arrived, Abbey had thrown two interception and guided the offense to a single first down.

However, whatever Navy head coach Ken Niumatalolo told his team at halftime must have worked. The defense forced an Army turnover on the second play of the half and gave the offense great field position. Six plays later Abbey took advantage of it by taking the ball over the goal line from one-yard out to cut the deficit to 14-7.

The Navy defense did its job again on the next drive and forced a three and out. Once again, Abbey succeeded in getting Navy’s offense moving, but this time it stalled out on the Army 11-yard line, and they were forced to kick a field goal.

Navy’s defense continued to have a great half by forcing another fumble (but the offense couldn’t capitalize on it) and a three and out. Then the one thing Army was afraid of happened—they lost the lead. Zach Abbey broke free for a 41-yard touchdown run to give Navy its first lead of the game, 17-14. 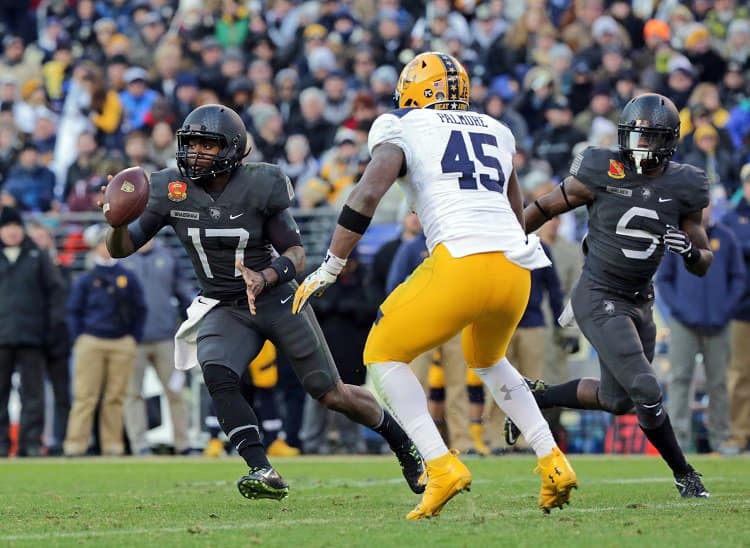 In year’s past, the run alone would have been enough to doom Army. But rather than be demoralized, junior quarterback Ahmad Bradshaw guided them on a 12 play, 80-yard drive that ended with him taking the ball in from nine-yards out for the go-ahead score.

Niumatalolo made an interesting decision on Navy’s next (and final) drive when he chose to punt on fourth and four from the Navy 40-yard line with 4:07 left in the game. His defense had played well in the second half, but they had just been decimated on the previous drive.

Sure enough, Army would not give the ball back and down went the streak as the Army Black Knights beat the Navy Midshipmen, 21-17—and the Corps of Cadets stormed the field. 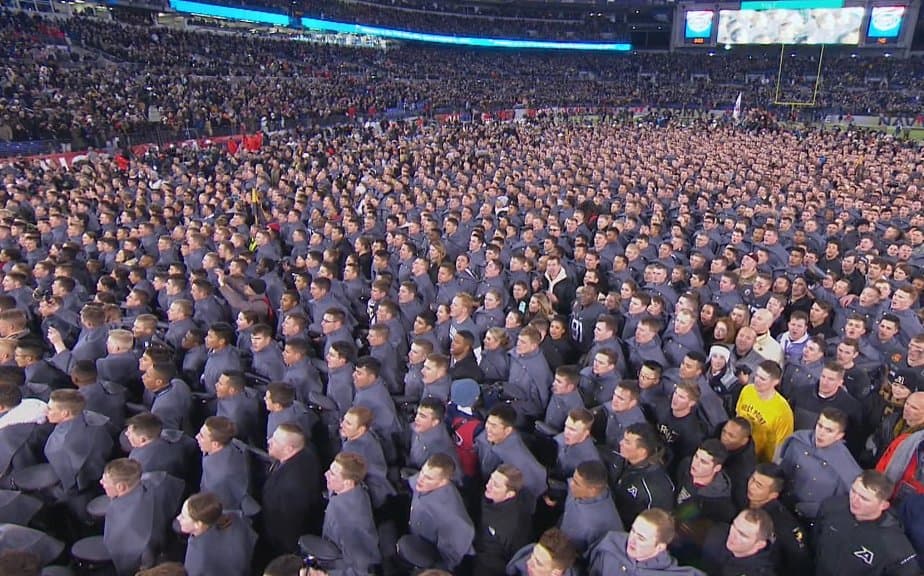 Maybe the product on the field did not appear to be the best football (because of the seven turnovers), but it was still a heck of a game played by athletes no one else wanted who will soon be stepping into harm’s way to protect our country.

Yeah, it may not have been the cleanest game, but it was certainly played well and by the best kind of people.