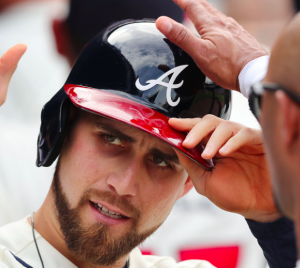 The Atlanta Braves have spent the past two years building for the future, and on Friday they made sure that center fielder Ender Inciarte will be part of that future. The Braves announced on Friday that they have agreed to a five-year extension worth Inciarte worth $30.525 million. The deal will keep Inciarte in Atlanta through at least the 2021 season. It also includes a $3.5 million signing bonus and a $9 million club option for 2022.

“We are thrilled to announce an extension for Ender,” Braves GM John Coppolella said in a press release. “We feel that he’s the best defensive center fielder in baseball and one of the best leadoff hitters in the game. Ender brings so much to our club, on and off the field, and we are happy to have him under club control for at least the next six years.”

Inciarte came to the Braves last offseason in what could turn out to be one of the most productive trades in franchise history. In the trade, the Braves shipped Shelby Miller to the Arizona Diamondbacks for Inciarte, shortstop Dansby Swanson, and pitcher Aaron Blair. Miller went on to have a disastrous 2016 season, during which he was demoted to the minors. Meanwhile, Swanson appears to be Atlanta’s shortstop of the future and Blair figures to compete for time in Atlanta’s rotation next season. After signing the extension, Inciarte is now penciled in as Atlanta’s center fielder of the future.

The Braves acquired Inciarte following a breakout season with the Diamondbacks in 2015. He then missed the first month of the 2016 season with a hamstring injury and struggled offensively throughout the first half of the season. However, Inciarte kicked it into high gear during the second half of 2016, hitting .341 with an .836 OPS after the all-star break. He also excelled hitting in the leadoff spot and may be Atlanta’s long-term solution in that role.

Inciarte has also become one of the best defensive center fielders in baseball. He committed just four errors in 2016 on his way to winning the first Gold Glove of his career. Inciarte also showed off his arm with 14 outfield assists last season.

With Inciarte locked up for the long term, he and Swanson figure to join first baseman Freddie Freeman in giving the Braves a new core group of players to continue building around. Outfielders Nick Markakis and Matt Kemp, despite being a little older, may also be part of that core, as Markakis is under contract for two more years and Kemp for three more years. Those two figure to flank Inciarte in Atlanta’s outfield for the foreseeable future, with Mallex Smith a candidate to be the team’s fourth outfielder.

In addition to that new core group, the Braves have one of the best farm systems in baseball, especially when it comes to pitching. The Braves have added a few veteran pitchers to help them in 2017 and bridge the gap to their young arms. With that young pitching on the way and a player like Inciarte locked up for the long term, Atlanta’s future is starting to take shape, and it’s a future that appears to be bright.