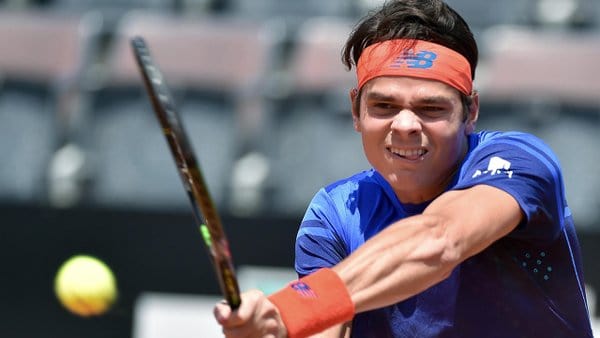 Here is a complete preview of all matches for Day 1 of the Rome Masters ATP and Premier WTA events scheduled for Monday.

CENTRE COURT:
Raonic v Cecchinato:  Milos the 10th seeded Canadian should overpower the Italian wildcard, similarly to the 6-3 7-5 win for him in Monte Carlo last month.
Safarova v Schiavone:  Schiavone at her best is a real threat to Lucie, but as she is now aging the Czech player must be favourite.  Francesca has not beaten Lucie since a 2010 Fed Cup clash.
Fognini v Garcia-Lopez:  A wide open stoush predicted, Guillermo has been patchy recently, given Fognini’s home crod advantage he is slight favourite.  That favouritism is confirmed when reviewing their history as Fognini leads 4-2.
Zverev v Dimitrov:  The young German will fancy his chances against the sporadic Bulgarian, after a strong win in this years’ Indian Wells win.  Dimitrov is unpredictable though, and could easily shine.
Pavlyuchenkova v Ivanovic:  Ana the 13th seed should beat the Russian, to kick start her clay court season.  The Serb has won 7 of their 8 prior meetings with plenty of lopsided affairs in her favour.

GRANDSTAND COURT:
Gasquet v Benneteau:  Gasquet shud win this all-French battle, Julien has slipped way down to 607th in the world as he recovers from a sports hernia.  Gasquet has beaten Julien in 3 meetings over the years.
Kyrgios v Caruso:  Nick can’t be overlooked here, should win easily.  Caruso is 251st in the world and fortunate to get a wildcard.
Errani v Watson:  Sara could be stunned if Watson is near her best, but expect the home crowd to keep Errani switched on.  Errani was too strong in their only prior meeting in Wuhan, China 2014.
Keys v Petkovic:  This could be game of the day.  Andrea and Madison have potential to be top 10 players, if they put it all together.  Andrea did beat her in 2014 in China easily, though it will come down to ball control, as each are strong stroke makers.
Bellucci v Monfils:  Gael should be too good for the Brazilian given his recent form.  Bellucci does have the ability to worry Monfils if he is off his game though.  Monfils has won their 3 prior meetings, but Bellucci has worried him taking a set in each match.

COURT PIETRANGELI:
Vandeweghe v V Williams:  Venus will be a little rusty, thus CoCo could worry her, with an energetic tactical game.  The pair have never met, Venus is probably favourite.
Strycova v Knapp:  The Czech has been decent all year, and should outplay the local wildcard. The Czech is half the ranking of the Italian and has beaten her twice before.
Seppi v Pospisil:  Andreas will hope the familiar home conditions work in his favour, but Pospisil could blow him off the court.  The pair have split their 4 meetings 2-2 in the past.
Dolgopolov v Thiem:  The young Austrian 13th seed will have a fight on his hands against the veteran Ukrainian, but should prevail.  The prior meetings count is at 1-1, though this is the first meeting on clay.

COURT 1:
Friedsam v Shmiedlova:  Schmiedlova has been struggling in 2016, Friedsam is slight favourite. The pair haven’t met since 2012, thus there will be an element of surprise between the two.
Kasatkina v Karolina Pliskova:  The Czech should beat the Russian as the 16th seed, although she has been patchy all year.  She beat her easily in the qualifying stages of Indian Wells earlier this year.
Svitolina v Puig:  A real danger match for the 15th seeded Ukrainian, Puig has form.  Svitolina won back in 2014 in their only other match, look out for a Puerto Rican triumph.

COURT 2:
Sock v Pella:  The Argentine is sure to worry Sock, on his preferred surface.  Sock had his number back in 2014 on the hard courts of Miami.
Sousa v Sonego:  Joao found form last week in Madrid and should beat the Italian wildcard ranked 333rd in the world.  Don’t be surprised if Joao serves him some bagels.
Karlovic v Gulbis:  Ivo will need to move well as Gulbis is the road-runner type of player that can worry anyone on his day.  Gulbis has beat the Croat in their 2 prior meetings in Vienna and Florida, on hard courts.

COURT 4:
Makarova v Kovinic: This is the match of the day for the WTA fans surely, Kovinic is in fine form, while Makarova is very consistent. The pair have never met, slight advantage to the more experienced Russian.
Cornet v Doi: The Frenchwoman should outclass the Japanese rising star, beating her from the back of the court.  They have never met, another interesting 1st round clash.
Gasparyan v Begu:  The Romanian takes good form into Roma, but could be wearying while the Russian is a star on the rise, who could overpower Begu.  First meeting between the pair, probably form will get Begu through.
Kukushkin v Coric:  The Kazakh qualifier will struggle to beat the Croatian rising star.  Coric who is just 19 has sped to 41st in the world, and looks to be a long time top 20 player on the rise.

COURT 6:
Pereira v Beck:  Teliana the Brazilian should be favoured to beat the German, although neither can be confidently backed.  The Brazilian has won 3 of the 4 prior meetings between the two.