Employees are allowed to disagree with their bosses and can even express their feelings in words if they so choose. However, they should always be careful of what they say and how they say it. The boss may respect what the employee has to say, but may not listen to it if the employee delivers it in an inappropriate fashion. 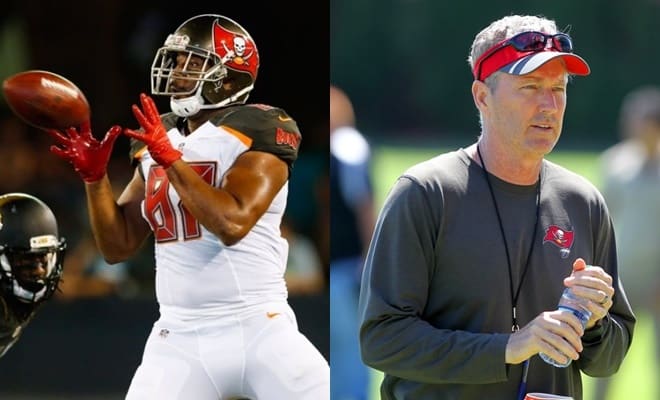 In a game that was largely uneventful (much like all preseason games at this point in the season), Jenkins yelling at Koetter was one of the few exciting moments. We will likely never know for sure what was said, but it appeared as if Jenkins was not happy he was still playing in the fourth quarter of a meaningless game.

Seferian-Jenkins ripped off his helmet as he came off the field after a play and started yelling at the coaches until wide receiver Russell Shephard pulled him away.

Koetter didn’t say much about the incident, but did give the media a heck of a sound byte:

“We’ve got to remember that players play, coaches coach,” Koetter said of the altercation (NFL).

When the Buccaneers took Seferian-Jenkins with a second round pick in 2014 the team hoped that it was drafting the next great tight end. At 6’5” and 262 pounds he certainly had the body type that every NFL team dreams of in a tight end. But in two seasons he has only played in 16 games (nine in 2014; seven in 2015) and has made only 42 catches for 559 yards and six touchdowns.

Earlier in the preseason Koetter kicked Sefarian-Jenkins out of practice because he didn’t think he knew what he was doing.

The fact that he was even playing Wednesday night makes it seem like his roster spot is not safe. Typically, the majority of the final cuts are guys that played in the final preseason game since coaches want to rest all of their regular players.

So maybe Sefarian-Jenkins is anxious because he is afraid he may be cut—and knows that catching just two of seven passes thrown his way for just 22 yards—against the fourth string defense–is not going to help his case. But if that were the case, you would think he would want to be on the field more to prove himself.

In his comments after the game, Koetter made it clear why Sefarian-Jenkins was playing:

As for the temper tantrum Sefarian-Jenkins had:

“Frustration was the cause of that,” Koetter said via ESPN’s Jenna Laine. “That kind of stuff happens in every game.”

Sefarian-Jenkins later admitted to letting his emotions get the best of him:

“I let my emotions get the best of me. I love my coaches. Coaches love me. We definitely talked and it was what it was. We came right over and talked again and it was good … Coach is cool, no issue.”

We’ll see if he feels the same way if he gets cut.