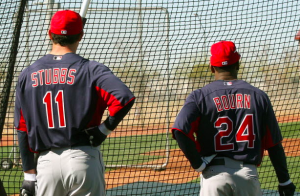 With their grip on a playoff spot starting to slip, the Baltimore Orioles added reinforcements to their outfield on the eve of the September 1 playoff eligibility deadline. On Wednesday, the Orioles acquired outfielders Drew Stubbs and Michael Bourn. Stubbs was claimed off waivers from the Texas Rangers, who let him go after activating Carlos Gomez last week, while Bourn was acquired via a trade with the Arizona Diamondbacks, with the Orioles trading minor league outfielder Jason Heinrich to the Diamondbacks.

Additions to the outfield have become necessary for the Orioles with center fielder Adam Jones nursing a sore hamstring. Baltimore has claimed it’s not concerned with the injury, but Jones has not played since last Friday when he was pulled after one at bat because manager Buck Showalter did not feel he was able to run close enough to full speed. Both Bourn and Stubbs are capable fill-ins in center field, and both could play elsewhere in the outfield when Jones returns.

After a dreadful two and a half years with the Cleveland Indians, Bourn was traded to the Atlanta Braves last year. Things didn’t go much better for him with the Braves, who let him go during spring training. However, he’s become a useful fill-in for the Diamondbacks this year, although Arizona no longer needs him with A.J. Pollock finally back from injury. “Left-handed, veteran guy who knows his way around. Got a great reputation as a teammate and professional and brings some things we are in need of and have been for a while,” Showalter said about what Bourn brings to the Orioles.

As for Stubbs, he was released by the Braves in early May, and ultimately landed a part-time role with the Rangers. However, he became expendable when Texas added Gomez. “He gives us a good, solid, dependable defensive outfielder,” Orioles GM Dan Duquette said about Stubbs. Duquette also mentioned that Stubbs is a potential base-stealing threat.

The Orioles are hopeful that Jones will be ready to play Friday when they begin a home series against the New York Yankees. However, with Bourn and Stubbs in the fold, Baltimore now has solid outfield depth in the event Jones needs longer to return or re-aggravates the injury.

“You’re trying to not only get your team ready but to get your roster ready in the event that you advance to the playoffs. You’re trying to acquire players to add to your club but also get your roster in order so you can make the right choices if you’re successful and get into the playoffs,” Duquette said about the moves Baltimore made on Wednesday. Any player not with an organization by midnight Wednesday would not be eligible to play in the postseason.

Of course, a postseason spot for the Orioles is far from certain. Baltimore has fallen four games behind the Toronto Blue Jays in the AL East and two games behind the Boston Red Sox, who own the top wild card spot. The Orioles are currently tied with the Detroit Tigers for the second wild card spot, with the Houston Astros just a game back and the Yankees only 2.5 games back. The Orioles are falling fast, and they’ll need all the help they can get the final month of the season to right the ship and secure a spot in the postseason.