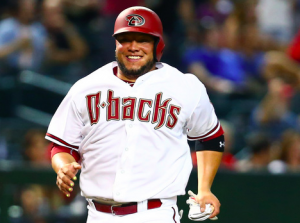 Less than a week after rumors first surfaced linking the Baltimore Orioles to free agent catcher Welington Castillo, the two sides have agreed to a deal. The team has not yet announced the deal, but several outlets have confirmed that Castillo has agree to a one-year contract worth $6 million with a player option of $7 million for 2018.

Castillo was a surprising addition to this year’s free agent class after the Arizona Diamondbacks chose not to offer him a contract for 2017. He was a strong offensive performer last season, hitting .264 with 14 home runs and 24 doubles to produce an OPS of .745. However, the Diamondbacks didn’t believe he was worth the raise he was likely to receive in his final year of arbitration.

Alas, Arizona’s loss is now Baltimore’s gain, as Castillo will be Baltimore’s primary catcher in 2017, with Caleb Joseph and Francisco Pena competing for the backup job. The one-year deal with a player option for a second year is a somewhat unique deal, but one that makes sense for both sides. In recent days, Castillo was said to be seeking a three-year deal. Meanwhile, the Orioles were reportedly hesitant to go past two years, although they preferred a one-year deal.

The deal the two sides struck appears to be a nice compromise. With a strong performance in 2017, Castillo will have the option test the free agent market again next winter. The Orioles, on the other hand, avoid a long-term commitment with this deal, although they do put themselves at risk if Castillo struggles next season and then exercises his option for 2018. Nevertheless, both sides are betting on Castillo having a productive year, which is obviously the preferred outcome for each party.

An interesting wrinkle into the equation could be catching prospect Chance Sisco, who the Orioles won’t have to rush to the majors with Castillo in place. However, if Sisco proves this year that he’ll be ready to be Baltimore’s primary catcher in 2018, it could persuade Castillo to decline his option if he thinks he could end up being Sisco’s backup in a contract year.

In the more immediate future, the Orioles signing Castillo all but ensures that the team will not look to re-sign Matt Wieters, who remains available on the open market. Baltimore certainly would have liked to have brought back Wieters, who has spent his entire professional career with the Orioles. However, the team seemed uncomfortable waiting for Wieters and potentially allowing secondary options like Castillo to sign elsewhere.

The market for Wieters has been mostly quiet so far this winter, with his agent, Scott Boras, suggesting at the Winter Meetings that Wieters may not sign with a team until January. However, teams like the Nationals, Astros, Rays, and Twins (and now the Orioles as well) have already addressed their need behind the plate, leaving Wieters with fewer options. The Braves are one of the few teams that remain in the market for a starting catcher. Of course, with Wilson Ramos and Castillo off the market, Wieters is by far the best catcher still available.

As for the Orioles, now that their situation behind the plate is settled, it’ll be interesting to see if they turn their full attention to re-signing Mark Trumbo. It’s hard to imagine Baltimore’s lineup surviving the loss of both Wieters and Trumbo, especially with an outfield that doesn’t look all that great on paper outside of Adam Jones. The Orioles are not the only team to express an interest in Trumbo this winter, and it’s too early to tell where he will end up signing.

Regardless of what happens with Trumbo, the Orioles should be happy to sign Castillo. He’s not a perfect replacement for Wieters, but he represents a good value signing without a long-term commitment. If nothing else, Castillo should help form a bridge to Sisco, although his track record suggests that Castillo is capable of being much more than a placeholder for the Orioles in 2017.