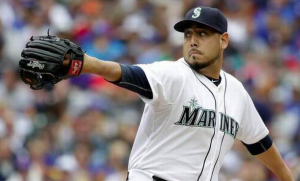 The Baltimore Orioles have made a late addition to their bullpen by acquiring lefty Vidal Nuno from the Los Angeles Dodgers for pitching prospect Ryan Moseley, an 8th round draft pick out of Texas Tech in 2016. The deal is designed to further boost a Baltimore bullpen that had the lowest ERA in the American League last year.

Meanwhile, the Dodgers needed to clear roster space for the recent signings of Chase Utley and Franklin Gutierrez, with Nuno being a casualty. This is the second time Nuno has been traded this offseason, as the Mariners traded him to the Dodgers in November in order to acquire catcher Carlos Ruiz.

The 29-year old Nuno has bounced around from the Yankees to the Diamondbacks to the Mariners since reaching the majors in 2013. He spent all of 2016 with the Mariners, posting a 3.53 ERA in 55 appearances. For much of his career, Nuno has been considered a lefty specialist, although he had no discernible splits between lefties and righties last season in Seattle.

Orioles manager Buck Showalter mentioned last week that the team is lacking left-handed options coming out of the bullpen other than closer Zach Britton, indicating a need for a pitcher like Nuno. Baltimore’s only lefty options in the bullpen besides Britton are Donnie Hart and Jayson Aquino, who both made their big league debut last season and have limited experience in the majors. The acquisition of Nuno helps to solve that problem for the Orioles.

“Our scouts like how Vidal Nuno competes in the American League and old school baseball people will appreciate how he works fast, throws strikes and changes speeds,” Orioles executive vice president of baseball operations Dan Duquette said of the trade. “We look forward to his contributions to the 2017 club.”

Nevertheless, the Orioles are in need of some rotation depth. Baltimore traded away Yovani Gallardo to the Mariners earlier this offseason, taking away a pitcher who started 23 games for them a season ago. Without Gallardo, the Orioles still appear to have a solid five-man rotation, although most of their depth comes from pitchers like Nuno and Mike Wright who may be better able to help the team out of the bullpen. A lack of depth is particularly concerning with some injury questions about their five starters, including ace Chris Tillman, who is unlikely to be ready for opening day.

Nuno now has a chance to fill a number of roles for the Orioles. He can serve as rotation depth in case there’s an injury in Baltimore’s rotation. He has the potential to be a lefty specialist, something the Orioles lack outside of their young, unproven pitchers. He could also serve as the long-man in Baltimore’s bullpen, providing a left-handed complement to a primarily right-handed rotation.

Obviously, this is a relatively minor trade by the Orioles, but Nuno has a chance to become a meaningful contributor for Baltimore this season. He makes an already strong bullpen just a little bit better.