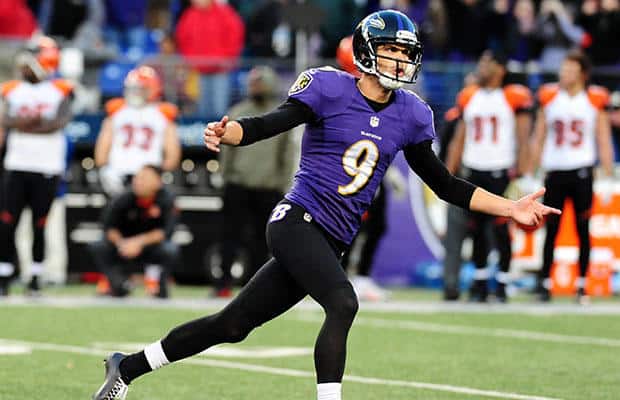 It is pretty easy to find a good kicker. Many good kickers go undrafted every year. Teams have been known to cut a perfectly good kicker if he misses a couple of crucial kicks or suffers a cold streak. It sucks, but since there are always plenty of good kickers out there looking for work, teams know they can pick up a decent guy at any time.

And pay him peanuts.

So—what do you do if you happen to have one of the great ones? You pay the man what he is worth and don’t hesitate to do it. What you certainly don’t do is play games with him like the Baltimore Ravens did with Justin Tucker.

In the end, they did right by him and signed him to a four-year, $16.8 million contract with a $6 million signing bonus and $10.8 million guaranteed. But how they got there is kind of screwy.

It is not unusual for contract negotiations to be a little contentious. Tucker’s negotiations seemed to be going okay, but on Thursday a rumor began to spread online that dispelled that notion.

It is not unusual for a team to present a player with multiple proposals throughout the negotiation process. Logically speaking, each offer will or should be in some way more enticing than the last. After all, they are trying to get the player to sign. It would make no sense for a team to make a proposal that is not as good as a previous one.

But that is what the Ravens did. As of Thursday afternoon, not only was the offer on the table less than previous ones, but it was less than what the Green Bay Packers are paying Mason Crosby (four years, $16.1 million), a career 79.7 percent kicker (Tucker’s career percentage is 87.8 percent).

Yes, Tucker has expressed his desire to remain with the team for life, but that doesn’t mean he should be valued at anything less than he deserves. When you have an offense that is good but not great—like the Ravens—a quality kicker can be the difference between making the postseason and watching the playoffs from home.

During his four years in the NFL, Tucker has proven himself to be one of the best. From 2012-15, the Ravens had 29 games decided by a field goal or less. Of those 29, the Ravens won 17 of them—including Super Bowl XLVII. In ten of those victories, Tucker came through with a game-winning kick.

Since the Ravens drafted Tucker, they have won 33 regular season games. So roughly a third of their wins can be directly accredited to him—yet they still played games with him when it came to his contract.

If that wasn’t enough of a reason for the Raven to sign him, the fact that he is the second-most accurate kicker in the league (and in league history) should have been. Sounds like the kind of guy that deserves to get paid, right?

In the end, they did the right thing and gave him the highest guarantee for a kicker in league history.

It would not be shocking if he held a grudge. When it wasn’t looking as if a deal was going to be made, according to Tucker’s agent, his client was so disillusioned with the process he vowed not to sign with the Ravens next year if a deal was not made this year.

But there was, so all is good—and he celebrated by taking his wife and in-laws out for turkey sandwiches (ESPN):

“When I first made the team in 2012, I went and got a burrito from Chipotle and got the chips and guac and didn’t worry as much about spending the extra couple bucks on the guac,” Tucker said. “So this time around, we’re celebrating with some Potbelly turkey sandwiches.”