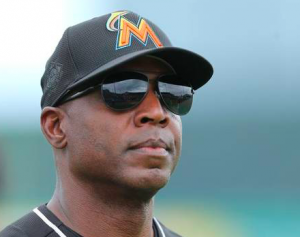 One of the best hitters in baseball history has been fired as a hitting coach. According to reports, the Miami Marlins will not retain hitting coach Barry Bonds after just one season with the team. The Marlins have not confirmed the news, but multiple reports indicate that Miami is parting ways with Bonds, as well as third base coach Lenny Harris and bullpen coach Reid Cornelius. Assistant hitting coach Frank Menechino will become the team’s primary hitting coach, a role he had in the two seasons prior to Bonds coming to Miami.

It was Marlins owner Jeffrey Loria who played an important role in bringing Bonds to Miami as a hitting coach, hoping he could mentor the team’s young hitters, most notably Giancarlo Stanton. On paper, Bonds has great credentials as a hitter, as he is the game’s all-time home run leader. Of course, Bonds also has a checkered past with regard to both PEDs and his relationships with those around him. The latter issue appears to have played a role in the Marlins choosing to not bring him back in 2017.

Bonds reportedly did not appreciate being called out publicly by manager Don Mattingly earlier in the season, which may have caused his commitment level to decline. It appears that Mattingly and Bonds, both accomplished hitters during their playing days, did not get along. One report even indicated that Mattingly threatened to leave the team if Bonds was retained as the hitting coach, according to an MLB coach. Whether that report is true or not, the fact that a coach within the game said it speaks volumes about the relationship between Mattingly and Bonds.

Stanton took a considerable step backwards in 2016 under the tutelage of Bonds, posting the lowest batting average and OPS of his career. Bonds was openly critical of Stanton during the season, while Stanton reportedly “tuned out” Bonds. Clearly, something was different for Stanton this season than in past years. Moreover, it generally doesn’t bode well for a team when its best hitter is at odds with the hitting coach.

It should be noted that Christian Yelich had a breakout season in 2016, while Marcell Ozuna got back on track after a terrible 2015 season and posted numbers akin to what he produced in 2014. Of course, Yelich was poised for a breakout season regardless of his hitting coach. It should also be noted that young hitters Dee Gordon and Adeiny Hechavarria also had disappointing seasons offensively, although Gordon’s struggles can be blamed on missing 50 games due to a PED suspension.

Where Bonds goes from here is unclear. Most were surprised that he was interested in becoming a coach in the first place, believing that a rocky relationship with both fans and the media during his playing days would encourage him to keep his distance from the game in retirement. It’s not hard to imagine another team being interested in Bonds as a hitting coach, but whether Bonds wants another opportunity to coach is another issue.