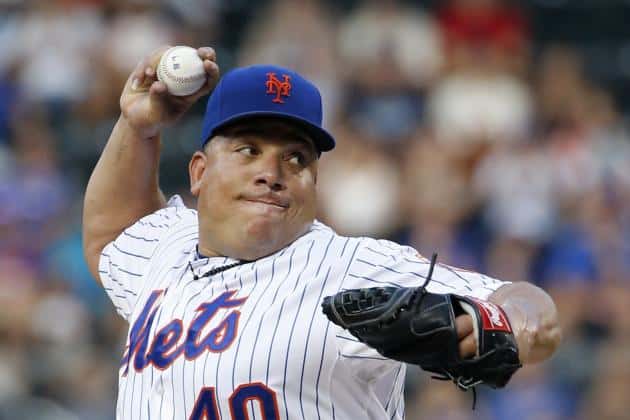 Wednesday was not a great day in the life of Bartolo Colon. First, the New York Post dropped a bombshell that the 42-year old pitcher is being sued for child support by a woman who is not his wife of 21 years. Then he took the mound at Citi Field mound as the New York Mets faced the rival Washington Nationals and had his shortest start of the season, taking the loss after failing to get out of the 5th inning.

First things first: the lawsuit. Colon was in court on Monday being accused by a woman named Alexandra Santos for failing to pay child support for two young children he allegedly fathered. The accusation, which The Post dropped on the public Wednesday morning, was a big blow to the veteran who has been married to his wife, Rosanna, for 21 years, with whom he has four sons.

Santos filed a lawsuit last year claiming that Colon has not paid child support for two children, an eight-year old son and seven-year old daughter. Colon’s wife, Rosanna, says she was aware of the lawsuit and the two children her husband allegedly fathered, but had no other comment. Colon himself has never publicly acknowledged Santos’ two children.

In the evening when Colon took the mound, he looked like a man who was distracted. Colon usually displays pinpoint command of his pitches, but on Wednesday he struggled with his control, walking five batters in 4.2 innings after walking a total of four batters all season prior to that. The veteran got himself into trouble on multiple occasions, and at times was actually able to wiggle out of it. However, with two runners on and two out in the 5th inning, Colon surrendered a two-run single to Anthony Rendon that ended his night and ultimately won the game for the Nationals.

Afterwards, Colon insisted that he was not distracted, saying through a translator: “When I’m here doing my job, nothing else affects me. I have nothing to add to that. I don’t care to talk about my personal stuff.” However, his struggles on the mound and his uncharacteristic control issues make it hard to believe Colon’s mind was solely focused on the game.

For the man they call “Big Sexy,” it has been a fast fall from grace. Earlier this month, Colon was the talk of baseball after hitting the first home run of his career, becoming the oldest player in major league history to hit his first homer. That moment in the sun is quickly becoming a distant memory after all that happened on Wednesday.

Of course, the guy who has managed to hang around the big leagues for 19 seasons and still remain an effective pitcher certainly has the tools to persevere and come back from this setback. But Wednesday was a dark day in Colon’s long and storied career and it may not be so easy to put it behind him.