Bartolo Colons Wants to Return to Mets in 2017 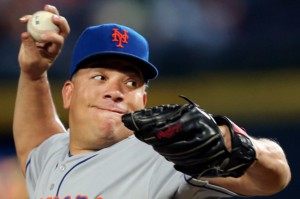 At age 43, most professional baseball players have long since retired and moved on to the next phase of their lives. But not Bartolo Colon. The ageless wonder they call “Big Sexy” is not only still going strong, posting a 3.35 ERA this season, but he also plans on pitching next season as well. Colon will turn 44 next May, and he says he’d enjoy being able to play the 2017 season back with the Mets.

The Mets brought Colon back in 2016, expecting him to move to the bullpen at some point. The Mets began the season with a “fab four” of starting pitchers in Matt Harvey, Jacob deGrom, Noah Syndergaard, and Steven Matz, and they expected Zack Wheeler to return from Tommy John surgery in July. At that point, the Mets thought they would have a “fab five” rotation most would consider the most talented baseball has seen in quite some time, pushing Colon to the bullpen, where he contributed during New York’s postseason run last year.

However, Wheeler has not returned as planned and will miss a second consecutive season due to Tommy John surgery, allowing Colon to stay in the rotation. Injuries and health concerns to the other four members of the Mets rotation have not only allowed Colon to remain in the rotation all season, but have also made him a focal point of the pitching staff heading into the stretch run.

“I’m pleased to be doing good work. I did expect to be in the bullpen at this point,” Colon said through an interpreter earlier this week. “I’m very thankful for the opportunity to still be starting.” He also says he’d welcome the opportunity to return to the Mets in 2017. “If they gave me the opportunity, I would be delighted to come back,” said Colon, who suggested that 2017 could be his final season, although he was not definitive in his statement, concluding “who knows?”

So, would the Mets be interested in Colon returning in 2017? A few months ago it would have seemed unlikely, but considering how crazy the injury situation with the Mets pitching staff has been this year, it seems like an increasingly likely scenario. Wheeler will enter 2017 throwing just one minor league inning since Tommy John surgery; Harvey enters the year coming off surgery for thoracic outlet syndrome; both Syndergaard and Matz have pitched this year with bone spurs in their elbow that may require offseason surgery; and deGrom is currently on the shelf with elbow discomfort.

“With or without craziness, he could be,” said Mets GM Sandy Alderson about the possibility of the team re-signing Colon this offseason. Some how, a 43-year old pitcher could be the closest thing the Mets rotation has to a sure thing health-wise in 2017.

If it matters, the Mets have shown to have pitching depth in their farm system, with Seth Lugo and Robert Gsellman providing quality starts while filling spots in New York’s rotation. Rafael Montero, Gabriel Ynoa, Logan Verrett, and Sean Gilmartin could also provide the Mets with rotation depth next season, with or without Colon.

However, if the Mets want to play it safe and have a reliable veteran presence on their pitching staff in case they can’t get their “fab five” starters healthy at the same time, bringing back Colon may be the best move. Considering what Colon has done for the Mets over the past three years, not to mention his desire to return to the New York, it would behoove the Mets to make Colon part of their plans for 2017.