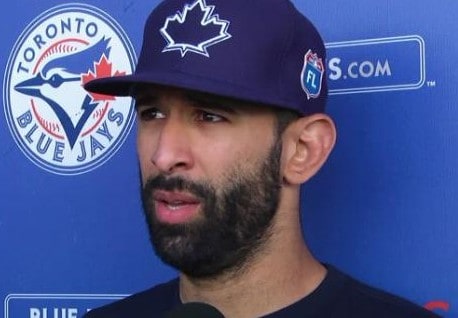 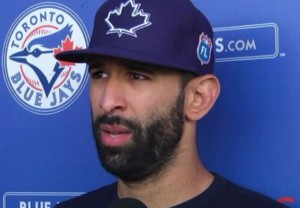 The Toronto Blue Jays usually potent lineup will be a little thin for the time being. One day after slugger Jose Bautista collided with an outfield wall, the Blue Jays placed him on the 15-day DL, joining teammate Troy Tulowitzki, who has been absent from Toronto’s lineup for the last three weeks. Bautista has been diagnosed with a hyper-extension of his left big toe, and while the Blue Jays are hopeful he will only miss two weeks, they won’t know for sure until Bautista undergoes further testing.

Bautista was wearing a walking boot in Toronto’s clubhouse on Friday, when the team officially placed him on the DL, recalling outfielder Darrell Ceciliani to take his spot on the roster. “It’s frustrating,” Bautista said Friday. “I’ve put in a lot of hard work, dedication and effort into being healthy, and this sort of stuff happens. It can only happen by playing aggressively, and that’s the type of player I am.” He also lamented the randomness of his injury, saying, “I could’ve stepped one inch shorter of the wall, one inch closer to the wall, and none of this would’ve happened. It’s just a little bit of bad luck.”

With Bautista and Tulowitzki both out of the lineup, the Blue Jays are missing quite a bit of power. Michael Saunders helped to make up for that during Friday’s win over the Baltimore Orioles by hitting three home runs, but unless he can repeat that performance on a regular basis, the Blue Jays will feel the absence of two of their biggest power sources.

The Toronto outfield is also starting to look thin with Bautista going to the DL. Ezequiel Carrera is expected to get most of the playing time in right field while Bautista is out, but despite hitting .326 in part-time duty this year, he brings little power to the table. Chris Colabello would have been a viable replacement for Bautista who could provide a little more pop, but he’s still serving an 80-game PED suspension.

The Blue Jays have done well as of late to close the gap in the AL East. Toronto’s current four-game winning streak has them tied with the Boston Red Sox, just one game behind the Orioles for first place. However, losing Bautista for at least two weeks was not in their plans. One has to wonder if the team’s recent offensive explosion can continue without the power threat Bautista poses in the middle of the lineup. There are other power sources in Toronto’s lineup, but time will tell just how much the loss of Bautista will impact the Blue Jays, as they continue to climb towards the top of the AL East.