Benches Clear Between Giants and Dodgers 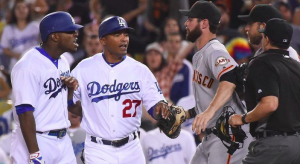 Things got heated between two hated rivals Monday night, as benches cleared between the Los Angeles Dodgers and San Francisco Giants at the end of the 7th inning in a game that was eventually won by the Dodgers. A spectacular pitcher’s duel between Madison Bumgarner and Clayton Kershaw was quickly overshadowed by a stare down and benches-clearing incident between Bumgarner and Dodgers outfielder Yasiel Puig.

Everything started with an innocuous ground ball down the first base line by Puig. Bumgarner got off the mound to field the ball, throwing Puig out at first base to end the 7th inning. On his way back to the dugout, Bumgarner appeared to say something while looking in Puig’s direction. The Cuban outfielder then took a few steps towards Bumgarner with only San Francisco first baseman Brandon belt to separate between the two.

The benches and bullpens of both teams soon emptied, as Bumgarner and Puig had to be separated. Cooler heads eventually prevailed without any punches being thrown or anybody getting ejected, but the scuffle did throw a wrench into the game between two teams fighting for the same division crown.

“I just ran, and he was looking in my direction,” Puig said through a translator after the game. “He asked why I was looking at him, and then I asked him why he was looking at me.” Puig added that he thinks Bumgarner was upset because at that point in the game he had given just one hit to the Dodgers, and that hit had come against Puig.

Of course, this is not the first time Bumgarner and Puig have had a misunderstanding on the field. In May 2014, the two exchanged words after Puig flipped his bat on a home run he hit against Bumgarner. Later that season, benches cleared after Puig was hit by Bumgarner and Puig made a move towards the mound with the two once again engaging in a shouting match.

“Every time I face him, it seems like we have those problems,” Puig said. “It seems to work out because we win.”

“I didn’t hear what was going on,” Bumgarner explained after the game. “I just got him out, and he tried to stare me down or something. That’s what it looked like to me.”

That scuffle turned out to be Bumgarner’s last act on Monday night, as he did not return the next inning, which may have been a mistake by Giants manager Bruce Bochy. Bumgarner allowed just one hit over seven innings, striking out 10 on 97 pitches. But Bochy pulled him from the game, only to see his bullpen fail to get the final six outs.

The Giants used three different pitchers in the 9th inning, none of whom recorded an out. Justin Turner and Adrian Gonzalez hit back-to-back RBI singles against Hunter Strickland to give the Dodgers a 2-1 win.

The win gives Los Angeles a six-game lead atop the NL West, lowering their magic number to clinch the division to seven. Meanwhile, the Giants are now tied for the second wild card spot with the St. Louis Cardinals, with both teams a game behind the New York Mets.

If the Giants had any hopes of taking the division away from the Dodgers, they needed to sweep the Dodgers in a three-game series this week. Any hope of doing that appears lost, meaning the wild card may be San Francisco’s only path to the postseason. To make matters worse, the Giants have to play five more games this season against the Dodgers, a team that is now fired up to beat their division rivals and keep them out of the playoffs after last night’s benches-clearing incident.