You have the opportunity to work with the world’s biggest sports bettor who has set record after record in the gambling world. Sign up with Sports Information Traders and see for yourself.

Sports Information Traders & Jon Price continues to be in the headlines for placing massive wagers. In Las Vegas he has over $300 million dollars in wages placed over a 5 year period. Now that Sports Betting is legalized for in person and mobile sports betting it’s lost any negative connotations or stigmas.

So as states expand there will be bigger and bigger wagers that you will see. Now 2022 is shaping up to be the biggest year in sports betting history with New Jersey having the biggest handle with over 8 billion dollars in wagers placed beating out Nevada.

With the Houston Astros in their last World Series appearance versus the Washington Nationals we got to see the newest big wager on a Jon Price scale of $3.5 million dollars. Something we covered right here at the Sports Information Traders news Desk (see Mattress Mack Sports Betting Wager on the World Series article). We talk a lot about big bets placed here. Jon Price of Sports Information Traders was featured for his million dollar win on Floyd “Money” Mayweather over Manny Pacquaio where he told the entire world that he was placing a huge wager on Mayweather and everybody who wants to also make money should follow in his footsteps. Later on that big wager got him some headlines and into a list of the top 5 living gamblers list. Another story put Fred Smith of Fed-Ex ahead of him where Smith wagered the last of the companies money at the Blackjack table to ensure the companies survival.

Today we will talk about another set of great gambling stories that don’t all involve Sports Betting or the legend Jon Price. Below are some of the best gambling stories to read about on the internet and winning tickets cashed including one wager that took 11 years in the making:

The Greek waiter was dead broke. He borrowed $10,000 and was fully leveraged to play heads up poker. He did so downtown Las Vegas at Binion’s Horseshoe and beat out the 15 best players at the time. To keep the good luck running at the Horseshoe he went on to play Craps. Hit a lot of points, hard numbers, and turned that $10,000 into $17 million. He was banned from almost every casino at one point and would bet $100,000 on a single dice roll to get his fix. The “Streak” as it’s known in gambling and betting circles lasted 3 years but Archie gave it all back shortly there after.

2) Betting The House on a Soccer Match

Back in September of 2001, a die-hard Tottenham fan bet the house (literally). His entire mortgage was on the line and with the opponent Manchester United down 3-0 going into the second half he was certain the bet he placed all to impress his girlfriend was about to pay off. What he didn’t expect was a Tom Brady Super Bowl 51 comeback where Manchester scored 5 goals in the second half and left him homeless and single by the end of the game.

A Welsh man across the pond bet back in December 1989 at Ladbrokes betting shop that Cliff Richard would be knighted, that U2 and Bono would still be around,a dn Eastenders would well forever be on television as well as Australian Soaps Neighbors and Home and Away still being broadcast on British television in the year 2000. Well they all came to fruition for this odd proposition bet and paid out over $200,000 or £194,400 for our English readers.

Organized Crime is not something to play with. Football matchups were experiencing serious blackouts back in the 1990’s and many knew something was up but couldn’t prove it at the time. Bookmakers paid out big time with over $75 million dollars lost as bookmakers paid out based on the final score of a game if the game was abounded even if it were due to remote controls being used to cut the floodlights.

5) Gambling On your Own Horse

Mike Futter a well known international gambler who runs bingo halls in Ireland and likes to play the ponies. He bet on Monty’s Pass 14 years ago in the Grand National. With over $1.3 million in winnings that day ranging from $6,000 each way @ 33-1 odds to $12,500 each way at 20-1 odds. The Preakness, Belmont, and Kentucky Derby gets some action like this but it rarely hits the headlines.

Gamblers like Mike Futter love horses and Texas Horseman and trader William Lee Bergstrom is no different. Being known in circles throughout Las Vegas as the “Suitcase Man” he appeared at Binion’s Gambling Hall in Las Vegas back in 1980 with a plan. The plan was that the casino would match any wager that he placed as long as it was his first wager and not an add on, double down, or retaliation bet. He had two suitcases and the first was filled with $777,000 and he won based on a don’t pass roll with the shooter crapping out with a 7 before the point was made. Later Bergstrom returned and this time bet $1 million dollars on the don’t pass line. The first roll was a 7 and he instantly lost the million dollars. He later commited suicide in Texas where he owned an apartment building in Austin and asked Binion to be remembered as the “phantom gambler at the Horseshoe” Casino. Rumors surround around his death being from a lost lover and not from gambling as he was up over half a million dollars at the time of his suicide.

Zhenli Ye Gon’s betting habits will always make you feel better. A near record but not the biggest was his losses of over $125 million dollars to Las Vegas, Nevada casinos. The money came from illicit gains in drug dealing and thus has landed him in jail. When his home in Mexcio City, Mexcio was raided over $200 million in cash and assets were seized. He’s also believed to have the largest recorded wager of all time.

A story that made national media attention when in 2007 midwestern business ownner terrance Watanabe just could not win. He pulled every marker possible at Harrahs properties and blew through $127 million dollars that he tried to later regain in an unsucessful lawsuit. Took him 20 years to inherit and build and only a few years to lose it all. If only he had taken up sports betting.

Back in 1903 money had a different value to it. The Hermit’s Pride was a group of professional gamblers who bet on horses back in Ireland and won in what is todays equivalent of $15 million dollars.

This is the saddest of the stories. Back on 08/24/1875 captain Matthew Webb was the first human to swim the English Channel. When the need for money arose he tried to swim across Whirlpool below Niagra Falls for $10,000 but never returned…

While business wagers and hedge fund bets such as the 2008 CDS (Credit Default Swap) Shorting was over a Billion dollars paid out on a single wager when it comes to gambling that tile goes to casino tycoon Kenny Packer. Australian Gambler and media tycoon Kerry Packer loved to gamble and was a close friend of Jon Prices who discussed betting strategies with him quite often. He’s lost over $50 million dollars in under a year and his worst streak was $28 million during a 3 week losing streak back in 1999 over in London, England.

12) Mattress Mack Hedges a World Series Bet with $3.5 Million on the Astros

While he was known as a furniture store owner and die hard Houston Astros fanatic Mattress Mack said that he would give out free furniture to those who bought if the Astros won the 2019 world series. This got him quite a bit of publicity and he almost cashed in his winner and had to use his insurance policy that he took out in case he had to give away free beds and sofas to the greater Houston area. In the end however the Washington Nationals defeated the Astros in 7 games and the biggest bets that he placed in Biloxi, Mississippi and in Atlantic City, New Jersey sportsbooks were never cashed in. ,

For more great sports betting news and gambling stories sign up above.

Some other notable Big Sportsbook Wins that were mentioned in a Circa Sportsbook article that is not as in depth as our coverage has some honorable mentions:

Tiger Woods $1.2 million bet by James Adducci. James is like Jon Price in that he has confidence when he places a big bet. He put $85,000 on Tiger Woods to win the 2019 Masters through the William Hill sportsbook. The odds when he placed the bet was 14-1. William Hill had never paid out a bet as large as this on a futures wager. The other intriguing point to note is that this was Aducci’s first ever wager on the advice of Jon Price’s Canadian betting affiliate. 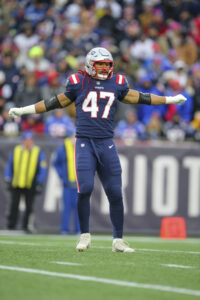 Charles Barkley doesn’t hide it that he loves to gamble. Besides Michael Jordan he is the biggest gambler to come out of professional sports. In 2002 Barkley placed a half a million dollar bet on the Patriots cashing in $800,000 but he went back in again for $100,000 betting against the GOAT Tom Brady for $100,000 on the Atlanta Falcons to win. As you know that one didn’t pan out for him.

Another headline we often read bout is a Las Vegas mane we call Bergstrom who returned to the Horseshoe three years later in 1984 and placed several additional bets, including a $1 million bet ($2.89 million present day value with inflation in 2022) which he lost. This bet remains as one of the largest bets ever placed against a casino.