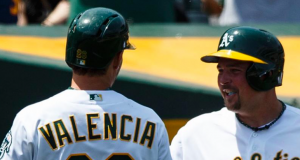 Oakland Athletics designated hitter Billy Butler has not appeared in a game since last week Wednesday, and the reason does not appear to be a baseball-related injury or issue. According to a report in the San Francisco Chronicle, Butler was injured during an altercation with Oakland utility man Danny Valencia on Friday. No one from the team has confirmed the report, but members of the team asked about it have not denied it either. If the reports are true, this matter would appear to be a low point for the A’s in what has already been a disappointing season.

According to the report, the altercation between Butler and Valencia stems from Butler telling an equipment manager that Valencia had not been wearing the spikes he led the manager to believe he was wearing. What transpired after that is unknown other than the fact that Butler has not been in the lineup since, while Valencia played both Friday and Saturday. He did not play in Sunday’s game, although it’s unclear whether that was a baseball decision or perhaps something punitive.

Butler was not available for comment on Sunday. On Saturday, Oakland manager Bob Melvin told the media that Butler was not in the lineup because he was suffering from nausea and vomiting. However, Melvin said those symptoms were not related to the flu, leading one to ponder whether Butler may have suffered a concussion during the altercation with Valencia. A concussion could cause nausea and vomiting and could have forced Butler to be away from the clubhouse and unavailable to speak with the media on Sunday.

Meanwhile, several teammates and even former teammates of Valencia have expressed their support for him on Twitter. Sunday night, Kansas City Royals first baseman Eric Hosmer tweeted: “Don’t understand all the negativity towards Danny Valencia. One of the better teammates/friends I’ve had in this game.” Hosmer and Valencia were teammates for part of the 2014 season with the Royals. Butler was also on that team.

Oakland outfielder Coco Crips responded to Hosmer’s tweet with: “I feel the same, Danny has been one of my favorite teammates as well. Solid guy and a hard worker.” A’s first baseman Yonder Alonso tweeted that he agrees with what both Hosmer and Crisp said about Valencia.

Of course, Valencia has had past issues in the clubhouse and has been known to get under the skin of some people. “He’s a guy that if you’re not his team, you may not like him, and you want to beat him,” Alonso said about Valencia earlier this year. “If he’s on your team, you want this guy playing every single night, helping you win. And if you’re in a fight, you want him right next to you.” Some believe that Valencia’s clubhouse issues may have contributed to him not being traded earlier this year, although a trade before the end of August may still be possible.

What exactly happened between Butler and Valencia we may never know for sure, but something serious happened between the two Oakland teammates, and it’s kept Butler from playing for at least three games. When Butler will return remains unknown, and whether Valencia will be punished or perhaps traded away from Oakland also remains to be seen.