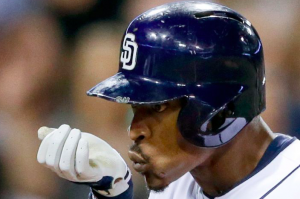 The Toronto Blue Jays have bolstered their outfield by acquiring Melvin Upton Jr. from the San Diego Padres. The trade was confirmed Tuesday morning, with the Padres receiving pitching prospect Hansel Rodriguez in return for Upton. San Diego will pay $5 million of the roughly $22 million left on Upton’s contract between this year and the $16.45 million he’ll make next season in the final year of his contract.

After two terrible seasons with the Atlanta Braves after signing a five-year deal prior to the 2013 season, Upton has bounced back in San Diego. This year, he is hitting .256 with 16 home runs, helping him post an OPS of .743. His power has returned, giving him an outside chance of matching his career high home run total of 28, which he set with the Tampa Bay Rays in 2012. He will be joining a Blue Jays lineup that is already accustomed to hitting the long ball.

The addition of Upton comes one day after the Blue Jays welcomed Jose Bautista back from the DL. With Bautista back in right field and all-star Michael Saunders in left field, Upton figures to share time in center field with Kevin Pillar, although Upton has a chance to earn the majority of the playing time in center. The addition of Upton also gives Toronto the option of using Bautista as a DH and pushing Edwin Encarnacion to first base, as Upton is capable of playing all three outfield positions.

Whether Upton will become a true game changer for the Blue Jays remains to be seen, but he should make some kind of impact. “We definitely like this lineup, there’s no doubt about that,” said Blue Jays manager John Gibbons before the acquisition of Upton. “It’s a good lineup. I don’t know what you could do to improve it, to be honest with you. Maybe there is somebody, but it would have to be a big-impact guy, I would think.”

The addition of Upton could also prove useful for the Blue Jays in 2017. Bautista, Saunders, and Encarnacion will all be free agents after the season, and the Blue Jays don’t appear confident that all three will be re-signed. Having Upton signed through next season will provide Toronto with some protection this winter in case Bautista and Saunders both sign elsewhere.

As for the Padres, Upton is the fourth player they have traded away this season, as San Diego continues to look far into the future, not expecting to compete until 2019 or 2020. Rodriguez, the player they received for Upton, is a 19-year old righty who is currently pitching in rookie ball. His fastball sits in the mid 90s and sometimes approaches triple digits, while his secondary pitches still need to be refined. He’s not expected to be on the big league radar for another few years.

For San Diego, it’ll be years until they know if this trade was worthwhile or not, but the Blue Jays are in need of an immediate payoff. Toronto is currently three games behind the Baltimore Orioles in the AL East, although they own the second wild card spot and trail the Boston Red Sox for the top wild card spot by just half a game. The Blue Jays are hoping to get an instant boost from the return of Bautista and the acquisition of Upton that can propel them into the postseason for the second straight year.