Blue Jays Lose Another As Troy Tulowitzki Goes To DL 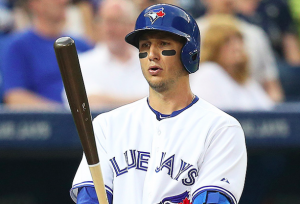 As the Toronto Blue Jays continue to spiral out of control and fall further behind in the AL East, the injuries continue to pile up. The latest injury victim is the always injury-prone shortstop Troy Tulowitzki, who Toronto placed on the 10-day DL Saturday with a strained hamstring. Tulowitzki hurt the hamstring sliding into third base during Friday’s game against the Angels.

Tulowitzki has been no stranger to the DL during his career, although this is just his second time on the injured list since being traded to Toronto in July 2015. It’s also the first time the 32-year old has had a problem with his hamstring, so he’s unsure of how quickly he’ll be able to recover.

“First time, so I don’t really know what to expect,” Tulowitzki said Friday after the injury forced him out of the game. “Nothing to gauge it off of here.”

Meanwhile, the Blue Jays remain optimistic, as manager John Gibbons said that the team putting Tulowitzki on the 10-day DL instead of having to commit to a 15-day DL was “definitely a factor,” as the Blue Jays hope 10 days is enough to put the problem behind Tulowitzki.

“I think it’s a pretty good rule change,” Gibbons said Saturday. “But we can’t take any chances. We don’t think it’s that big a deal. Big enough to put him on the 10-day DL, obviously.”

Of course, even if Tulowitzki is able to return from the DL after just 10 days, it’s a bad time for the Blue Jays to lose anybody. Toronto has already lost several key players to injury this April, making it that much harder for the team to dig itself out of the deep hole they’ve dug this year. Heading into Sunday, the Blue Jays are 4-13, already 8.5 games out of first place in the AL East. The next closest team to them in the division is the Rays at 10-9.

Tulowitzki joins third baseman Josh Donaldson on the DL, depriving the Blue Jays of the entire left side of their infield and arguably their two most impactful hitters. Donaldson was the team’s best hitter before going to the DL, and his absence made the presence of Tulowitzki in the middle of Toronto’s lineup all the more important, especially with Jose Bautista and Russell Martin both struggling early in the season.

Moreover, the Blue Jays have little depth on the infield. The light-hitting Darwin Barney is the best candidate to fill-in for Tulowitzki at shortstop, although he was already the primary replacement for Donaldson at third base. Ryan Goins, who’s best served playing second base and is a career .224 hitter, may become Toronto’s primary shortstop while Tulowitzki is out.

Meanwhile, as Toronto’s lineup tries to survive without Donaldson and Tulowitzki, its pitching staff is also just trying to survive with starters Aaron Sanchez and J.A. Happ and reliever J.P. Howell on the DL. All of the injuries have the Blue Jays towards the bottom of the American League in both scoring runs and preventing runs.

“It’s just one of those things, you just deal with it,” Gibbons said Saturday of all the team’s injuries. “That’s part of it. We’ve been pretty fortunate the last couple years. This year it’s hitting us. Hopefully it really doesn’t last too long. But I mean, everybody deals with it.”

Unfortunately for the Blue Jays, they don’t appear capable of dealing with all the injuries. Heading into the season, it was apparent that the Blue Jays lacked depth and would need to stay healthy in order to compete for a third straight trip to the ALCS. That hasn’t happened, and with Tulowitzki joining Toronto’s walking wounded, it’s becoming less and less likely that the Blue Jays will be able to recover from a disastrous start.