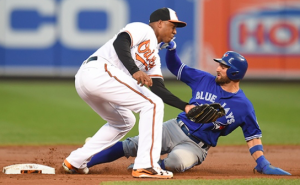 What could have turned into an unbelievably complicated situation in the American League wild card race has turned into a rather simple, one-game, winner-take-all scenario, just the way MLB drew it up. The Toronto Blue Jays and Baltimore Orioles will meet Tuesday night in Toronto for the right to advance to the ALDS against the Texas Rangers. Each team had some worrisome moments the final weekend of the season, but this is the matchup most expected to see in the A.L. Wild Card game all along. What should we expect to see in the American League’s one-game wild card playoff?

Being division rivals, these two teams met 19 times during the regular season, with the Blue Jays winning 10 games and the Orioles winning nine games, so there is little to separate these tow teams from one another. In fact, it was that one game difference in head-to-head meetings that gave the Blue Jays home-field advantage in this one-game playoff. For what it’s worth, the Orioles took two of three from the Blue Jays in Toronto last week, although the Blue Jays won six of the 10 games the two teams played north of the border this season.

These two teams fought tooth and nail against one another all season long, only to end up in the same place with the same goal of advancing to the ALDS. That should ensure that both teams play with an edge, perhaps even more so than an ordinary elimination game. On top of that, these are actually two rather similar teams. Both love playing long-ball and rely on home runs to put points on the board, potentially leading to a slugfest.

The Blue Jays will send Marcus Stroman to the mound on Tuesday, and he’ll be opposed by Baltimore’s Chris Tillman. Stroman went 0-5 during the month of September, but ran into some hard luck, posting a 3.41 ERA in across six starts the final month of the season. His final start of the season, came against the Orioles, in which he gave up four runs over seven innings. He faced Baltimore twice before that this season, including a start in June in which he allowed seven runs and lasted just  3.2 innings. However, Stroman does bring some playoff experience to the table, starting three postseason games last season, so nerves in such a big game should not be an issue for him.

Tillman, meanwhile, has been Baltimore’s undisputed ace all season, making him the perfect candidate to start for the Orioles in the wild card game. He faced the Blue Jays four times this season, allowing two runs or less in three of those starts, so he’s proven that he can handle Toronto’s lineup, which is not something all pitches can say.

If there’s one way to separate these two teams from one another, it could be in the bullpen. The Orioles have the best bullpen in the American League with regard to ERA, while the Blue Jays are close to the bottom and the second worse of any team that made the postseason. Toronto closer Roberto Osuna has not been as reliable the second half of the season as he was earlier in the year, and veteran setup man Joaquin Benoit is unavailable after suffering a calf injury during a benches-clearing incident with the New York Yankees last week.

Meanwhile, Baltimore’s closer Zach Britton was a perfect 47 for 47 in save situations this year. With a slew of capable setup men led by Darren O’Day, the Orioles appear more capable of shortening the game and protecting a lead in the late innings than the Blue Jays, which could be the difference in a close game.

The Blue Jays are being favored in this game (-146), although much of that could be due to playing at home in a game between two teams that are nearly impossible to distinguish from one another. However, it is the Orioles who have the edge in this matchup. Tillman has been their ace all season, while Stroman was Toronto’s fourth best starter this season. Baltimore also has a bullpen that can close out the game, preventing any late-game dramatics from the home team. The Orioles should win this game and face the Rangers in the ALDS. Baltimore wins 6-4.