Posted on September 29, 2016 by Bryan Zarpentine 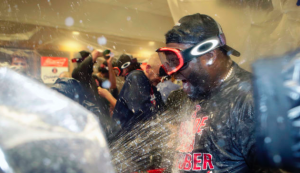 For the third time in the last decade, the Boston Red Sox are champions of the American League East. Despite suffering a loss Wednesday night to the New York Yankees, on a walk-off grand slam no less, the Red Sox clinched the AL East after the Toronto Blue Jays lost to the Baltimore Orioles. The Red Sox had already guaranteed themselves a place in the postseason, but by locking up the division they clinch a spot in the ALDS, ensuring that they will to have to take their chances in a one-game wild card playoff.

The party was well deserved. The AL East has been one of the most competitive divisions in baseball all year, as the Red Sox, Blue Jays, and Orioles have spent most of the year locked in a three-way tug-of-war with no one willing to budge or no one strong enough to knock the other two out. Finally, a recent 11-game winning streak helped Boston pull away, giving them the division and forcing the Blue Jays and Orioles to fight it out with a few other teams for the two wild card spots in the American League.

The Red Sox should also be excited to be back on top of the AL East after two consecutive last place finishes. “This never gets old,” said Red Sox owner John Henry. “We’ve got to stop doing this worst-to-first thing. It’s a roller coaster.”

Boston finds itself back on top of the the AL East in large part because of breakout seasons from several of its young, emerging stars. Of course, veteran David Ortiz, playing his final big league season, has also played a big role in the team’s success. Ortiz, a man who has celebrated a World Series championship on three separate occasions, was partying as hard as anyone in the visitor’s clubhouse Wednesday night.

“It’s crazy,” said the soon-to-be-retired Ortiz. “I wanted to celebrate on that field so bad, but it is what it is. We’re going to celebrate anyway. I’m going to drown in this, man!” His teammates are now trying to send him off with a fourth World Series ring.

“We want to make sure we send David off the right way,” said fellow veteran Dustin Pedroia. “Hopefully we do that.”

“We’re not done yet. We haven’t won a World Series. To be here for [Ortiz’s] last year is definitely special,” added youngster Mookie Betts.

The Red Sox will undoubtedly enter the postseason with a great deal of confidence, and that confidence starts at the very top with the owner. “When a team is as effective as this team has been on the road late in the season, you know there’s something special,” Henry said. “I feel pretty good. Let’s put it this way: Where we are now, I wouldn’t want to play us going into the playoffs because this is a really talented team and really tough.”

With four games left in the regular season, the Red Sox are one game in the loss column behind the Texas Rangers for the best record in the American League, giving them a chance to earn home-field advantage throughout the playoffs with a little help. Boston’s opponent in the ALDS is yet to be determined, but considering their recent 11-game winning streak, it’s not a stretch to say that they’ll be considered favorites to advance.