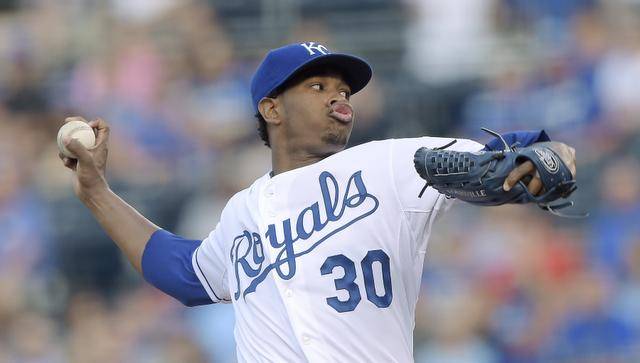 Yordano Ventura starts for the Royals vs the Red Sox.

One of the hottest teams in baseball, the Boston Red Sox, will go on the road for a short 2-game road trip against the Kansas City Royals which kicks off Tuesday night.

The Red Sox are 24-19 on the year which is only good enough for a share of first place in the American League East with the equally hot Baltimore Orioles. Kansas City is just below .500 with an 18-19 record, as they currently hold 3rd place in the AL Central.

Boston has the best lineup in the league as they’re batting 0.298 on the year and averaging 6 runs a game. They’re even hotter of late as their batters are averaging a ridiculous 0.369 over the last 7 games.

Kansas City will look to slow down the Red Sox with right hander Yordano Ventura taking the hill where he’ll face Rick Porcello for Boston. Ventura has struggled of late, with an 8.36 ERA in his last 3 starts, but is 3-2 on the year with an overall ERA of 4.62 in 7 games.

The Royals will have their work cutout for them if they wish to get back on track against the streaking Red Sox. Boston is 1-04 against the Royals over the last 3 seasons, including 5-2 at Kansas City.

Boston will look to keep their bats red hot as they visit for a short 2-game series before heading back home to continue a long home stand. This is a good opportunity for them to put some distance between themselves and the Orioles while playing a struggling Kansas City Royals team.