"Mr. Price has been given the "Billy Walters treatment" by the betting establishments in the Las Vegas area, due to his distinct ability to pick winners and cost casinos millions."
Home
Baseball
Brandon Crawford's 7-Hit Performance Ties National League Record

Posted on August 9, 2016 by Bryan Zarpentine 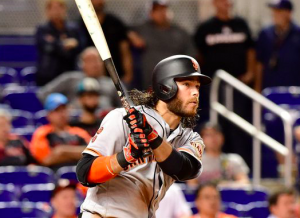 The San Francisco Giants and Miami Marlins combined for 31 hits Monday, as the Giants squeaked past the Marlins 8-7 in a 14-inning game, and seven of those hits came off the bat of San Francisco shortstop Brandon Crawford, trying a National League record.

Crawford was 7 for 8 with a double, triple, and five singles, finishing a home run shy of the cycle. He also scored one run and drove in two more. Crawford is just the fifth player since 1913 to collect seven hits in one game, with Rennie Stennett of the Pittsburgh Pirates being the most recent to do so in 1975, although he had seven base hits in just nine innings.

“It doesn’t happen very often that you get eight at-bats in a game so I figured it didn’t happen a whole lot, but you don’t think about stuff like that when you’re playing,” Crawford said after the game. “I got a couple to drop in and squeak past and then I hit a few balls hard, too, that found holes.”

In addition to tying the National League record, Crawford’s seven hits also set a new franchise record, which is now a record the San Francisco shortstop appears proud to own. “It’s crazy to me,” he said. “The history of the Giants with all the great players that have come through here you would think that someone would push across seven hits in one day. That’s pretty crazy to be in that small company.”

Marlins manager Don Mattingly, an accomplished major league hitter in his own right, walked away impressed and a little bewildered by Crawford’s performance. “What do you have to do to get that guy out? I don’t know,” Mattingly said. “We didn’t figure it out today. He’s a tough out right now and obviously, when you’re getting seven hits, you’re feeling pretty good about yourself. So I’m sure this whole series, it’s not going to be fun trying to get him out.”

Crawford actually entered the game in a 6 for 36 slump, but in the span of one game he went from ice cold to scorching hot. Over the course of the game, Crawford raised his batting average a full 13 points to .278. “I felt good. That’s just baseball. One day you feel like you can’t square anything up and the next day you get a couple that squeak through and you barrel a couple up,” Crawford said. Perhaps most importantly, Crawford’s final hit of the night drove in what would go on to the the winning run in the 14-inning series opener. The win keeps the Giants one game ahead of the Los Angeles Dodgers in the NL West.

If there’s a caveat to Crawford’s performance it may be that San Francisco manager Bruce Bochy wasn’t in attendance to see it. Bochy fell ill Monday morning and spent the night in a Miami hospital for observation. He’s expected to be on the bench when the Giants play the Marlins Tuesday night, but he’ll be a day late if he wanted to see a record-breaking performance from Crawford.