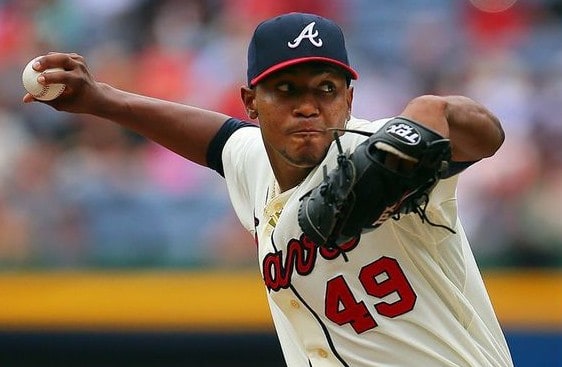 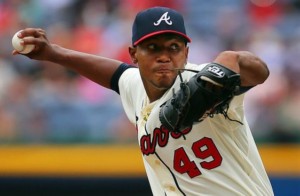 With a little more than a month until the August 1 non-waiver trade deadline, chatter and speculation are starting to pick up regarding what players could be moved before the deadline. One of the top targets among pitchers being mentioned is Julio Teheran of the Atlanta Braves. However, Braves GM John Coppolella hinted to fans on Friday that Teheran will not be traded this summer.

The comments came during a Q&A session Coppolella conducted with fans Friday via the team’s Twitter account. One fan brought up comments from Coppolella suggesting that he wanted to re-build the Braves through pitching and then asked the GM if he would trade the team’s best pitcher, referring to Teheran. Coppolella responded :”I don’t see us trading Julio.” Another fan asked if Teheran and closer Arodys Vizcaino are in the team’s future, to which the GM responded, “Yes. I don’t see us trading Teheran at this point, he’s almost into “right-arm” type status for us now.”

Over the last couple of years, the Braves have traded nearly every viable trade chip they have in their organization in order to acquire young prospects, so it stands to reason that Teheran and Vizcaino would be next in line. Coppolella’s comments would seem to indicate that the team is almost finished selling off pieces and more focused on developing young talent, which would mean Teheran and Vizcaino will be part of the solution in Atlanta.

Teheran is signed through 2019 on a rather team-friendly deal, with a $12 million club option for 2020, which could turn into a bargain if he continues to develop into a front line pitcher. Vizcaino has two more years of arbitration and isn’t scheduled to hit the free agent market until after the 2018 season. But if the Braves view him as a piece worth keeping for the long haul, they could attempt to sign him to a long-term deal, just as they did with Teheran.

Of course, just because Coppolella says he’s not looking to trade Teheran doesn’t mean other teams won’t be asking about him. Recent reports suggest that the Boston Red Sox have inquired about both Teheran and Vizcaino. Any talks between the two teams would still be in the preliminary stages, but the Red Sox are not likely to be the only team that calls the Braves to ask about the availability of their young pitchers this summer.

Coppolella has said in the past that he would need to be overwhelmed by a trade offer in order to part with Teheran. That would appear to leave the door slightly ajar to the possibility of trading Teheran, despite what Coppolella may have told fans on Friday. For a pitcher like Teheran who’s still just 25 years old, pitching at a high level this season, and signed to a team-friendly contract, a team may be willing to overwhelm Coppolella to get him. The bottom line is, never say never when it comes to a pitcher like Teheran, especially when you consider Atlanta’s recent trade history.