Posted on September 9, 2016 by Bryan Zarpentine 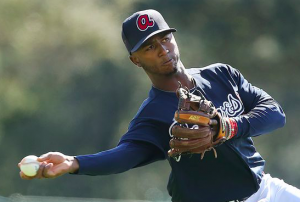 The future for the Atlanta Braves is dependent on many of the prospects in the team’s highly-rated farm system reaching their ceiling. Unfortunately, the Braves saw one of their best prospects suffer an injury setback earlier this week. Atlanta confirmed Friday that 19-year old shortstop prospect Ozzie Albies suffered a fractured elbow in a minor league playoff game on Wednesday, an injury that will keep him on the shelf for several months and could have an impact on his 2017 season.

Albies suffered the injury on a foul ball he hit during a double-A playoff game on Wednesday. He was in obvious pain immediately after the swing. The Braves say that Albies has surgery to address the fracture scheduled for Tuesday. If his rehab goes as planned, Albies may be able to begin baseball activities as early as January, although there’s no guarantee the injury will heal that quickly. Either way, the injury could put Albies a little behind with regard to preparing for the 2017 season.

Albies split the 2016 season between double-A and triple-A. At double-A, Albies won the Southern League batting title and put up surprising power numbers for a teenager of slight build. However, his numbers at triple-A were a bit more modest with .248 average and .659 OPS.

He’s rated as the no. 14 prospect in all of baseball, according to MLB.com. Albies is also the no. 2 ranked prospect in Atlanta’s farm system, behind only shortstop Dansby Swanson, who is currently in the big leagues and projected as the team’s shortstop of the future. Albies is a shortstop by trade, but began the transition to second base this year in order to accommodate Swanson.

Atlanta’s plan for the future appears to involve Swanson being the shortstop and Albies being the second baseman for many years to come. The Braves believe that tandem could develop into one of the best middle infields in all of baseball. The hope was that Albies would come to spring training in 2017 and compete for a spot on Atlanta’s opening day roster. However, this injury may alter those plans.

The Braves had planned to send Albies to the Arizona Fall League to further accelerate his development and give him the best chance to earn a spot on the big league roster next season. Missing out on the Arizona Fall League will hurt Albies, especially considering his solid but unspectacular offensive numbers at triple-A this year. The fact that he won’t begin baseball activities until January at the earliest could also require him to return to triple-A at the start of 2017.

The future remains bright for the 19-year old Albies, but this elbow injury has the chance to be a significant setback for him. If the injury heals properly, he should be able to pick up where he left off and make his big league debut at some point in the 2017 season. Nevertheless, it is a disappointing injury for the Braves, who are relying on Albies to be a big part of the team’s future success starting next year.