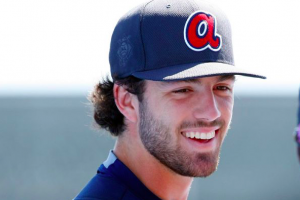 The number one overall pick in the 2015 MLB Draft is coming to the big leagues. The Atlanta Braves announced Tuesday that shortstop Dansby Swanson was being called up to the majors and would make his big league debut Wednesday night when the Braves host the Minnesota Twins. Swanson began the season in advanced-A ball and heads to the big leagues straight from double-A, where he hit .261 with eight home runs, five triples, and 13 doubles, posting an OPS of .745 in 84 games.

Swanson’s promotion comes the day after the Braves traded shortstop Erick Aybar to the Detroit Tigers, opening up the shortstop position in Atlanta’s infield for Swanson. Swanson is not putting up gaudy numbers in the minors, but he’s a polished player after excelling in college at Vanderbilt, and the Braves were expecting him to move quickly through the minors and possibly make his big league debut before the end of the season.

“He’s not setting the world on fire, but I think pretty much everybody remembers what we saw in Spring Training,” Braves manager Brian Snitker said. “We’re not asking this kid to come in and carry us to the Promised Land. We’re asking him to come in and be a part of this team. He’s a good player. I think we all saw that in the spring, and it’s time to get a look at him.”

Braves president of baseball operations John Hart referenced Swanson’s maturity as reason why the team believes he’s ready to play in the big leagues right now. “I think that Dansby is going to be able to handle it mentally,” Hart said. “He’s not a kid that if he comes in and really struggles right out of the gate that it’s going to affect him. This is a kid that finds a lot of ways to help you win games other than maybe what he does with the bat.”

Hart adds that Swanson’s performance now could help determine what the Braves do at shortstop next season. “We don’t expect him to come up here and be the savior, but we feel like this is an opportunity for us to take a good look and get him some experience up here in the big leagues,” Hart said. If Swanson shows he’s ready, he could be Atlanta’s opening day shortstop in 2017. However, if he looks overmatched and the Braves decide they want him to start next season in the minors, they may have to sign a shortstop this winter to act as the bridge to Swanson.

The Braves also have another highly-rated shortstop prospect in 19-year old Ozzie Albies. “He’s obviously a lot younger than Swanson, and we’ll kind of go day by day with him and see where it goes,” Braves GM John Coppolella said about Albies. “He’s got a bright future, and it won’t be long until he’s up here soon. There will be a lot of good, young players following them, as well.” Albies was promoted to triple-A earlier this season, only to be returned to double-A. The Braves eventually expect Albies to be their every day second baseman, switching positions to accommodate Swanson.

Of course, Swanson was originally drafted by the Arizona Diamondbacks, only to be sent to the Braves last winter along with Ender Inciarte and Aaron Blair for Shelby Miller, a trade that could pay big dividends for the Braves. Atlanta believes Inciarte and Blair will both be part of the team’s future, but the Braves are banking on Swanson to eventually emerge as one of the top shortstops in the majors and a player who can play a big role in turning the franchise around. In a way, Atlanta’s future starts Wednesday, when Swanson will make his big league debut.