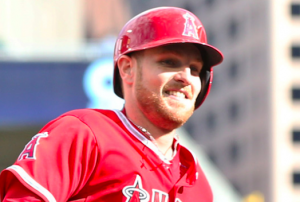 The Milwaukee Brewers and Los Angeles Angels completed a relatively minor trade on Tuesday involving a pair of catchers. In the trade, the Brewers acquire catcher Jett Bandy in exchange for catcher Martin Maldonado and minor league pitcher Drew Gagnon.

Maldonado has long been Milwaukee’s backup catcher, forming a tandem behind the plate with Jonathan Lucroy for much of his career. The move to acquire Bandy appears to be geared towards getting younger, as the Brewers continue a large-scale rebuilding project. On the other side, the Angels add a veteran catcher, as they look to reload in 2017 in hopes of making some noise in the AL West.

Bandy, 26, made his big league debut in September 2015 but only received two at bats. He was then recalled this past season in May when Geovany Soto was placed on the DL and ended up spending the rest of the season with the Angels. In 70 games in 2016, Bandy hit .234 with eight home runs and nine doubles, good for a .674 OPS.

“He’s a well-rounded catcher,” Brewers GM David Stearns said about Bandy. “He comes with an above-average defensive profile across the board, has been a very successful catcher in controlling the running game throughout his career. That stems from both a strong arm and an exceptionally accurate arm. We believe he handles pitching staffs well.”

Stearns also believes Bandy will start hitting for more power. “It hasn’t shown up in massive home run numbers throughout his career, but he’s consistently hit the ball hard,” said Stearns. Bandy hit 13 home runs at double-A in 2014 and 11 homers at triple-A in 2015.

Bandy joins what is a somewhat crowded catching situation in Milwaukee. With Lucroy and now Maldonado out of the picture, the Brewers are looking for someone new to take the reigns behind the plate. In addition to Bandy, the Brewers also have Manny Pina and Andrew Susac. Neither is an established big league regular, although both showed promise with the Brewers late in the season. Milwaukee will likely hold an open competition among the three during spring training to determine playing time for the 2017 season.

The trade is a homecoming of sorts for Maldonado, who was originally drafted by the Angels in 2004. He was released after the 2006 season in part due to immaturity and issues off the field. However, Maldonado says that experience helped him turn his career around. “When they released me, that was a wake-up call to me,” he says. “If that doesn’t happen, I maybe never would have made it to the big leagues.”

With Soto being a free agent, Carlos Perez is the only other catcher the Angels currently have on their roster aside from Maldonado. Perez didn’t contribute much offensively last season, opening the door for Maldonado to become the primary catcher for his new team, even if he’s not much of a force offensively either. If nothing else, Maldonado does possess more power than Perez.

On the surface, this trade is a simple exchange of backup catchers, but it has a chance to be an impactful move for both sides. The Brewers add a young catcher with some potential to a wide-open competition, while the Angels add a solid defender and a veteran presence behind the plate. It’s possible that both teams could end up benefiting from this deal in a meaningful way.