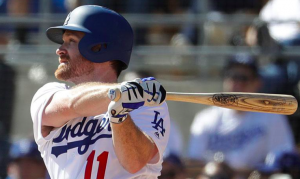 Just as they did a year ago, the injuries are slowly piling up for the Los Angeles Dodgers early in 2017. The latest to hit the DL is second baseman Logan Forsythe, who will be lost for the foreseeable future due to a hairline fracture of his right big toe. Ironically, first baseman Rob Segedin was also placed on the DL Wednesday because of a strained big toe. The two join an already crowded injured list in Los Angeles that also includes Rich Hill, Scott Kazmir, Franklin Gutierrez, and Andre Ethier, among others.

Forsythe was hit by Rockies pitcher Kyle Freeland in the 1st inning of Tuesday’s game. Initial X-rays were inconclusive, but when he was re-evaluated on Wednesday, Forsythe was diagnosed with a hairline fracture of the big toe. Under normal circumstances, the Dodgers could be looking at four to six weeks without Forsythe. However, with the injury being a hairline fracture, there’s hope he’ll be able to return in as little as two weeks.

“It’s not ideal, but they were optimistic about it not being a typical break,” Forsythe said Wednesday. “Not four to six weeks, maybe two weeks I can get back out there. I’ve had breaks like this before and it’s just pain tolerance. Whenever I feel like I can go, I will.”

Forsythe, who is no stranger to injuries involving his feet, said he was surprised that doctors told him he had a broken bone.

“I’ve been hit on there harder and thought it was broken,” he said. “I thought with this one I kind of got lucky. But it hit a smaller bone and we got a little bit of a crack.”

Upon his return, which Forsythe hopes will be as soon as possible, the second baseman expects to wear orthotics and special protection to better protect his feet and toes from additional injuries.

“I think with the padding and tape, I think it will be OK,” Forsythe explains. “If I get a direct cleat on the bone, I think it will light up. With this type of fracture, the bone gets sticky in two weeks, from what I got from the doctor. It will get sticky enough to where I can tolerate the pain.”

The Dodgers traded for Forsythe in January and he has quickly become an important part of their lineup, hitting .295 with a .748 OPS despite not hitting a home run this year. He’s actually been most productive out of the leadoff, which has been a pleasant surprise for the Dodgers early in the season.

Fortunately, the Dodgers have a veteran replacement for Forsythe waiting in the wings in Chase Utley. However, Utley is off to a slow start this season with just one hit in his first 20 at-bats. While Forsythe is on the DL, Utley is expected to get most of the playing time at second base against right-handed starters. Enrique Hernandez and Chris Taylor figure to start at second base against left-handed pitchers.

In the grand scheme of things, the Dodgers should be able to survive a couple weeks without Forsythe, assuming he recovers quickly and can tolerate a little pain when he returns. However, the Dodgers have been a little slow out of the gate, just 8-8 in their first 16 games of the season. The team has also sent 11 players to the DL less than three weeks into the season, putting them on pace to break the record of 28 players on the DL they set last season. The Dodgers have a fair amount of depth in their organization, but at a certain point, it becomes too difficult for the club to gain any traction with so many injuries piling up.