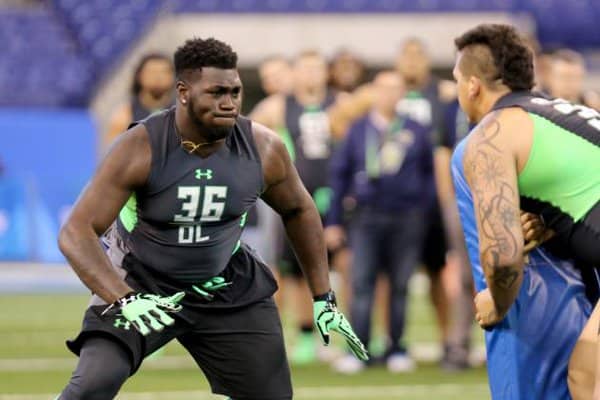 When Dominique Robertson was picked up by the Tampa Bay Buccaneers, the last thing he probably wanted to do was become another one of those guys involved in an incident before training camp. There is always someone that gets in trouble every year, but as an undrafted rookie, doing anything illegal or embarrassing can get you cut.

You certainly don’t want to be involved in a shooting or be the one that gets shot–which is what happened to him recently.

Police do not know exactly when, where, or what happened. Robinson claims he was shot standing outside of an apartment building. A car pulled up and fired in his direction. However, no one in the area heard shots or knew of any disturbance, and there is no evidence of a crime being committed at the supposed scene.

Robertson isn’t saying something, and it appears that he didn’t like the police questioning him for hours after he was released from the hospital (he had gunshot wounds to his back, buttocks, and legs). To be more precise, he didn’t like how he was treated, so he has filed a complaint against the officers involved.

His attorney, Zulu Ali, talked about Robertson’s treatment in a statement released to ESPN:

“We were terribly concerned about Mr. Robertson’s welfare and the blatant disregard for his rights, health, and safety. Not allowing his attorney access to check on his welfare, and denying him water, medication, and access to medical attention was abuse on the part of the Sheriff’s department.”

Apparently, Robertson was taken to the police station after being released from the hospital and questioned for 5-6 hours. In that time, he is claiming that he was denied water, access to his medication, and his attorney. His family was not allowed to speak to him and were threatened with arrest.

The police have not commented on the situation and have not even acknowledged talking with Robertson. According to Robertson’s attorney, his client was likely not the intended target, but an innocent bystander.

It is not hard to see why the police questioned him for so long since there is no evidence of a crime or any witnesses to the incident. They don’t believe him.

If he was telling the truth, there should have been some evidence at the scene. You would think at least one person in an apartment complex would have heard something.

His lawyer says he just wants to get down to the bottom of why his client was detained and questioned. The answer to that is simple–it does not appear as if his client is telling the truth about the incident. Since something illegal clearly happened, as officers of the law, they are trying to find out.

Robertson is expected to recover and be fine. Tampa Bay’s players report to training camp on July 25.