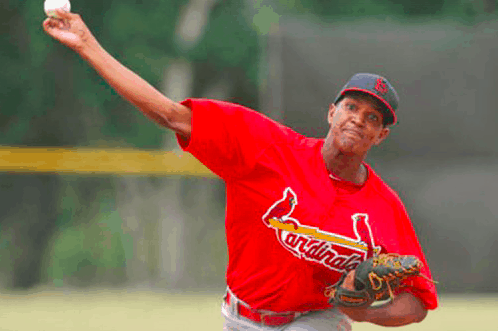 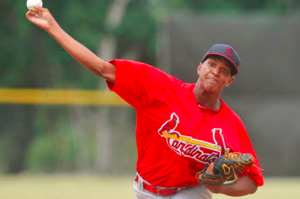 Over the last decade or so, few teams have developed pitchers better than the St. Louis Cardinals. From Adam Wainwright to Michael Wacha to Trevor Rosenthal to Carlos Martinez and even the recently sidelined Alex Reyes. The next in that long lineage appears to be 21-year old righty Sandy Alcantara, a pitcher the Cardinals believe has a chance to surprise a lot of people by reaching the big leagues in 2017.

Alcantara is currently ranked 9th among prospects in the St. Louis farm system, according to MLB.com. Listed at 6′ 4” and 170 lbs. (although reports indicate he’s gained as much as 20 lbs.), he is slight of build and has the appearance of someone who could still be in high school. Yet he throws a fastball that has been clocked as high as 102 mph, a pitch that scouts give a grade of plus-plus. Alcantara also a changeup that shows signs of being an above-average pitch, as well as a curveball that is also on its way to becoming an average or better offering.

With an arsenal like that, it’s no wonder that Alcantara has started to turn heads early in spring training. Alcantara finished last season by making six starts in advanced-A ball, which theoretically gives him a long way to go to reach the big leagues. In fact, MLB.com estimates his arrival in the majors to be 2019, more than two full seasons away. But thus far in camp, the Cardinals have seen a pitcher who could reach the majors this year.

“When you think about where (Rosenthal) was or Carlos Martinez was in their careers, I think Sandy is paralleling them,” says Cardinals GM John Mozeliak. “What could this year look like for him? It wouldn’t shock me if he pitched in the big leagues.”

In the past, the Cardinals haven’t been shy about pushing pitchers to the majors at a young age. Rosenthal was 22 when he made his big league debut; Martinez was 21; Wacha was 21; and just last season Reyes was called up just a few weeks shy of his 22nd birthday. So why can’t Alcantara be the next to follow that path?

“I remember seeing him last August and you could see the evolution starting to happen and the development happening,” Mozeliak recalls. “Dynamic fastball. Has to improve the secondary stuff, understand his secondary pitches, and understand how to pitch. From a pure talent standpoint he’s real exciting. You always hate judging a book by its cover, but you look at him now and he looks the part.”

Cardinals manager Mike Matheny has also remarked this spring about the progress Alcantara has made. The way Matheny has spoken about him makes one wonder if the St. Louis skipper is already thinking about ways to use him later in the season.

“He’s a specimen,” Matheny says of Alcantara. “This guy is impressive in how he’s developed over the last year. A year ago you just saw a very thin (player who) just still looked kind of like a kid. He looks like a man who has taken the next step. Watching his athleticism, watching the way he moves, watching how he handles just his disposition and his mound disposition as well, there’s a lot of things that he’s improved on over the last year.”

Mozeliak says he could envision Alcantara finding a role in the St. Louis bullpen before the end of the season, much like Rosenthal, Martinez, and Reyes all did when they were his age. It might be a long shot to think that Alcantara can crack the opening day roster, but a little more than a week into spring training, he’s already put himself on the radar for a big league promotion later in the season.