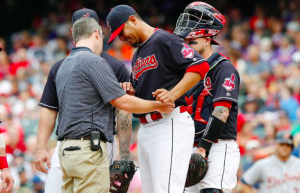 It has not been a good week for the Cleveland Indians starting rotation. Last weekend Danny Salazar left a game with tightness in his elbow and is now unlikely to pitch again this season. On Saturday, Carlos Carrasco suffered a broken hand on a line drive hit right back to the mound, and he is now done for the season.

Carrasco threw just two pitches against the Detroit Tigers on Saturday before he was struck by a line drive hit by Ian Kinsler. After exiting the game, Carrasco underwent X-rays and was diagnosed with a non-displaced fracture of the fifth metacarpal, which is in the pinky. After the game, Cleveland manager Terry Francona said that Carrasco would be sidelined for six to eight weeks, meaning his season is over.

The Indians were without Carrasco earlier in the season, as he missed roughly six weeks, including the entire month of May, with a hamstring injury. But outside of that six-week period, Carrasco has pitched at a high level all season and has been a big reason why the Indians are poised to win the AL Central. Cleveland was also planning on him being a big part of the team’s postseason rotation, as he and Corey Kluber would have been Cleveland’s top two starters in the playoffs.

After Carrasco departed Saturday’s game, eight different relievers combined to pitch 10 shutout innings, as the Indians went on to beat the Tigers 1-0 in 10 innings. The win gives the Indians an eight-game lead atop the AL Central, lowering their magic number to seven with 14 games left to play in the regular season. The odds of the Indians being able to close out the division without Carrasco and Salazar remain good, but the challenge they face in the postseason without them will be substantial.

“It’ll make this more challenging,” Francona said after announcing that Carrasco was done for the season. “But at the same time, when we do it, I think it’ll feel all that much better. It’s another challenge, but we feel like we’ll figure it out.”

The Indians already appeared uncertain as to how they will fill out the back end of their rotation without Salazar, and that problem will be exacerbated further without Carrasco. Klubber is now the obvious choice to start the team’s postseason opener, and now Trevor Bauer appears to be the most likely option to pitch Game 2 of the NLDS. Unfortunately for Cleveland, Bauer has taken a step backwards during the second half of the season, and in his three starts during the month of September, he has posted a 6.75 ERA, so he has no been at his best as of late.

Behind Kluber and Bauer, who the Indians send to the mound in the playoffs is anybody’s guess. Josh Tomlin and Mike Clevinger are the most likely candidates, but they are far from ideal choices. Before Salazar went down, Tomlin was actually removed from the rotation following a series of dreadful starts in August. Clevinger, meanwhile, has been more effective as a reliever than as a starter.

“We have to make sure that these guys are all prepared to do whatever job they’re going to do when it comes to the postseason,” said Cleveland pitching coach Mickey Calloway. “The good thing is Kluber and Bauer can probably pitch every fourth day, or whenever you need them to. Bauer’s arm never hurts and Kluber’s just a beast. That helps. But we’re going to prepare guys for the postseason, and if we get in, we’ll go from there.”

Unfortunately, injuries always seem to play a role late in the season and in the playoffs, and the Indians appear to be getting the short end of the stick this year. With both Salazar and Carrasco being lost for the season in a short period of time, there’s no denying that Cleveland’s World Series aspirations have taken a serious hit.