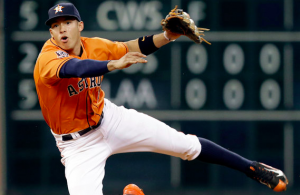 The Houston Astros have sent shortstop Carlos Correa home from the team’s current road trip to be evaluated by doctors for a shoulder injury. Astros manager A.J. Hinch says the injury likely occurred on Monday when Correa made a diving stop in the field. Correa says he experienced discomfort in the shoulder on Tuesday while going 1 for 4 with three strikeouts. On Wednesday, he was diagnosed with shoulder inflammation and sent back to Houston to be examined by team doctors.

“Carlos is a little beat up, so we sent him to see our doctors,” Hinch told reporters on Wednesday. “He was a little uncomfortable yesterday and went through the normal routine pregame and then had a couple of things last night happen where the inflammation increased. And [we] sent him for tests and decided to send him back to Houston to see our doctors,”

Hinch is optimistic that it’s a minor issue and that Correa will be back soon, but he will be out until at least Friday when the Astros begin a series back home against the Chicago Cubs. Correa is the second Astros player sent back to Houston to be examined by team doctors this week. Starting pitcher Dallas Keuchel was also dispatched to Houston for tests, as he will miss multiple starts.

The timing of the injury is unfortunate for Correa, who has played some of his baseball over the past month. He currently has a 12-game hitting streak, during which he’s batting .333. “It’s obviously tough to lose another player for a couple of games,” Hinch said Wednesday. “But we’ll be able to handle it and put a good team out there and try to get a couple of wins.”

The Astros will move rookie Alex Bregman to shortstop while Correa is out, with fellow rookie Yulieski Gurriel taking over for Bregman at third base. Bregman was the 2nd overall pick in last year’s draft and is a shortstop by trade. However, he’s played primarily at third base since making his big league debut at the end of July with Correa entrenched at shortstop. After some initial struggles, Bregman has come on strong and is one of Houston’s hottest hitters right now.

Meanwhile, Gurriel is a natural third baseman who has seen a lot of time at DH and mostly played out of position since making his big league debut last month. He’s hitting .300 over his first 40 big league at bats and will likely welcome some time at third base.

The silver lining to Correa’s injury is that the Astros are well suited to fill in for him due to the presence of Bregman and Gurriel. There’s also optimism that Correa will be able to return to the lineup this weekend. However, the Astros are locked in a tight race for the second wild card spot alongside the Baltimore Orioles and Detroit Tigers. Houston is in good shape to win games without Correa, but losing a game or two while he’s out could end up being the difference between making the playoffs and not making the playoffs at season’s end.