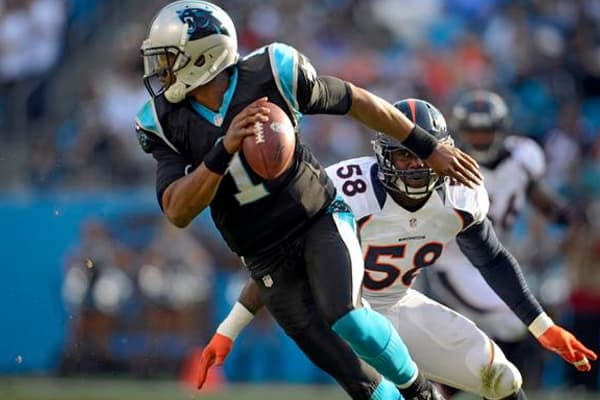 The Panthers will face the Broncos in a Super Bowl Rematch to start the 2016 season.

Kicking off the 2016 NFL season, the Carolina Panthers and Denver Broncos meet in a Super Bowl 50 rematch at Mile High Stadium. While it’s still May, it’s never too early to get ready for the upcoming football season. Who has the best odds of coming away with a 1-0 record from this matchup? A preview and prediction are below.

Overall, these two teams did make headlines during this offseason. The loss of both Manning and Osweiler has obviously shaken up the offense for the Broncos, as it’ll now be either Sanchez or Lynch under center come Week 1. As for the Panthers, the defensive side of the ball has some massive changes on the back end, with both Norman and Tillman being let go.

After a 24-10 defensive drubbing of the Panthers in Super Bowl 50, revenge will definitely be on the minds of this Carolina team. Cam Newton wants to make a statement following up an MVP season, and show that he can handle playing against the best defense in the NFL, and he’ll have a major reinforcement as 6-foot-6 No. 1 wideout Kelvin Benjamin returns from his ACL injury a year ago. The Florida State product’s return turns a dreadful WR corps into at least a respectable one, especially with the presence of tight end Greg Olsen in the middle drawing attention.

Ultimately, that’ll help the Panthers, but will it be enough?

The Broncos defense took a couple of hits with the losses of Jackson and Trevathan. Both were productive starters in 2015, but the key to this team was obviously the pass rush and secondary talent. Von Miller was re-signed, of course, so things aren’t going awry entirely without them; not to mention, Aqib Talib, Chris Harris Jr., Bradley Roby and T.J. Ward will still all be roaming the secondary. Surely, Jackson will be missed the most, but the Broncos addressed the position in the second round of the draft with Georgia Tech’s Adam Gotsis, as well as the signing of Jared Odrick. Neither of those guys have proven they can play as well as Jackson, but they’ll have the chance to show what they can do soon.

This game could be decided by the Panthers defense, however. The key ingredient to how dominant they can be without Norman and Tillman depends entirely upon who’s quarterbacking the Broncos. Either way, it seems to be a major advantage for Carolina, as Sanchez is a known commodity (and not a very good one at that) and Lynch is simply too inexperienced at this point to be able to pick apart a weaker Panther secondary — especially considering how fantastic their front seven is in their own regard. Denver is going to have to rely upon the ground game, but that’s easier said than done against two stud defensive tackles — Star Lotulelei and Kawann Short — and the best inside linebacker in football: Luke Kuechly. The best mode of attack would be to run off the left edge with the newly signed Okung, but again, it may not matter against this front seven.

The Panthers should be fresh and focused heading into this game, and have the benefit of not going through a quarterback change. That will be huge, so expect Carolina’s defense to take full advantage of the inexperience or shear lack of talent at that spot for the Broncos — regardless of whoever ends up starting Week 1.

It will definitely be a low-scoring game — the under is advised for that 43.5 mark. As for the three-point advantage for Denver, expect the underdogs to get their revenge in a gritty, grind-it-out performance.