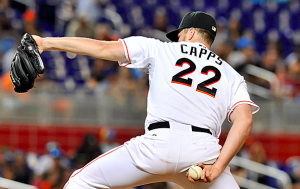 When Carter Capps takes the mound for the first time in 2017, a lot will have changed since the last time he was on a major league mound in 2015. For starters, he’ll be on a different coast, having been traded from the Miami Marlins to the San Diego Padres at the trade deadline last summer, despite spending the entire season on the DL while he recovered from Tommy John surgery.

Capps may also find himself in a new role, that of closer. After emerging as a dominant setup man with the Marlins in 2015, posting a 1.16 ERA, Capps is poised to take the next step in 2017 and become a closer, even after sitting out an entire year.

Padres manager Andy Green says he remembers watching Capps pitch for the Marlins while Green was serving as the third base coach for the Diamondbacks and being impressed with the righty’s performance and mentality. “Every single hitter we had came back to the dugout complaining about how they can’t see the ball, they can’t hit him, they don’t like him,” Green recalls. “Universally, you’ll hear guys say he’s the toughest at-bat in the big leagues.”

Capps, of course, has a unique delivery, as he hops towards the plate while also bringing the ball behind him, hiding it from the hitter. “There’s a comfort level there,” Capps says about his funky motion. “I know (my delivery) looks weird to everybody else, but it actually feels very comfortable to me.”

Ironically, Capps began throwing that way in 2014 after learning that he had a partial ligament tear in his elbow. “I started protecting it, I think, mentally,” he explains. “Then, I went into that offseason playing catch, and I think I was protecting it subconsciously, and it gradually turned into my mechanics, because it went unchecked, I guess. It’s not like I was trying to do that.”

That change in delivery appears to be the catalyst for his dominant season in 2015. Perhaps surprisingly, it has not been blamed for the tear in his elbow, as Capps already had a partial tear and was likely headed for Tommy John sooner or later. More importantly, he Padres don’t appear to be worried about his unusual delivery causing any more elbow problems.

Now fully healthy, Capps is set to compete with Brandon Maurer to be San Diego’s closer in 2017. Mauer saved 13 games in 19 opportunities while posting a 4.52 ERA for the Padres last season, so he doesn’t exactly have a tight hold on the job. Ryan Buchter and Brad Hand may also factor into the competition. However, Green appears to be a huge fan of Capps and has already started to envision him as the team’s closer.

“He has that type of personality. He walks around, carries himself with extreme confidence,” Green said about Capps. “I’ve seen him on the mound, and it looks like a closer. We’re genuinely excited about his health. And we’re going to do everything to hold him back and bridle him early in camp, because this guy wants to run through a wall right now.”

Green adds that making him the team’s closer may actually help the Padres control his innings in his first year back from Tommy John. This could actually make it easier for Capps to win the closer’s job, which Green describes as a “toss-up” at this point.

Capps says that his goal ever since undergoing surgery is to be ready for opening day this year. He appears to be on track to meet that goal, and there also appears to be a good chance that he’ll have earned the job as San Diego’s closer by the time opening day rolls around. As long as Capps is healthy, Green appears poised to put him in that role.

“I personally believe he’s a top-three reliever in the game,” Green said of Capps. “I think he’s elite, and in due time, everybody will see that.”