Cavaliers-Heat Recap: Cleveland Loses Game To Miami And Andrew Bogut For The Season

Earlier this season, LeBron James made it clear that he really wanted some more help on the roster. During the season, barring a trade, it is kind of hard to add anything substantial. But the team was able to land a couple of quality bench players in Deron Williams and Andrew Bogut. Whether Williams ends up contributing much remains to be seen.

Bogut, however, is already done. Not because the team changed its mind or opted to go in a different direction. Inside his first minute on the court for the Cavaliers Monday night, he ended up breaking his leg. 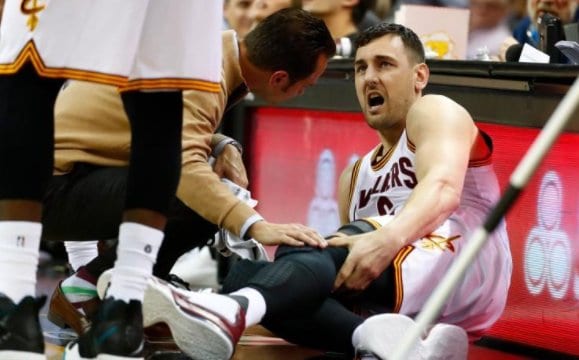 The break occurred at the 11:38 mark of the second quarter. Miami’s Okaro White tried to drive past Bogut, but in the process, his knee ended up colliding with Bogut’s shin. Bogut immediately went down and was clearly in serious pain. He had to be helped back to the locker room and could not put any pressure on his leg.

“As soon as the collision happened, I heard it break,” LeBron James said after the game. “And when I went over to him, and he said [it was broken], I already knew it. I heard it crack. It took the air out of the whole building.”

X-rays revealed that Bogut had fractured his tibia. The typical timetable for recovery is three months. So, he could make it back for the Finals, but more than likely he is done for the season. He played all of 58 seconds for the Cavaliers before getting hurt.

But, much like entertainers say the show must go, there was a lot of basketball left to play after Bogut’s injury.  When the injury occurred, the Heat were leading, 29-22. They extended the lead to 15 points late in the quarter, but the Cavaliers were able to close the gap to ten points before the half ended.

Cleveland got off to a hot start early in the third quarter and closed the gap to three points, but then the Heat took over. By the time the final quarter rolled around, the Cavaliers were down by 18 points, 89-71.

A strong effort in the fourth saw Cleveland get as close as five points, but then Dion Waiters put the nail in the coffin with a 32-foot three-pointer to close out the scoring, 106-98. Cleveland lost to the Heat Saturday night as well, 120-92.

Waiters led the way for the Heat with 29 points followed by Wayne Ellington who had 18 points off the bench and made five of ten from three-point range. LeBron James and Kyrie Irving scored 62 points for the Cavaliers but didn’t get much help from anyone else. No one else scored in double figures. 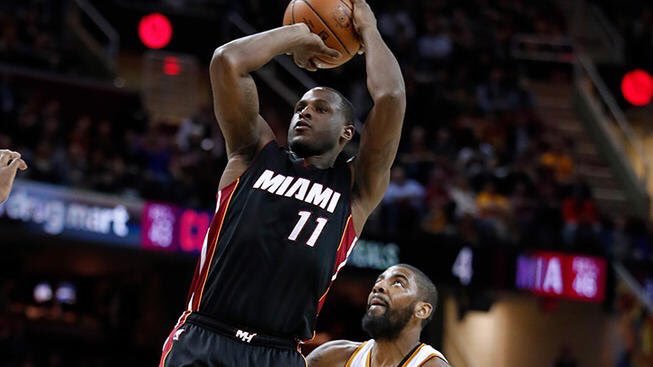 After the game, the talk in the locker room was more about Bogut and not the team’s second loss in a row.

“When you bring a guy in, you don’t expect that type of thing happening a minute after he checks into the game,” said Cavaliers assistant coach Larry Drew (ESPN). “It can certainly take a little bit out of your sail. But injuries are a part of it [the game], and you have to play through it.”

Cleveland will hope to get back on the right side of the scoreboard when they play the Pistons in Detroit Thursday night. Miami, who has won 19 of their last 23 to surge into playoff contention, will try to keep the good times rolling against Charlotte Wednesday night.