Charlie Strong is not going to be fired—at least not yet.

The seat was starting to get kind of warm for Texas Longhorns head coach Charlie Strong entering the 2016 season. He had only been at Texas for two seasons, but they were two losing seasons and folks in Austin demand results. A third could easily mean the end of his time in the Lone Star State’s capital. 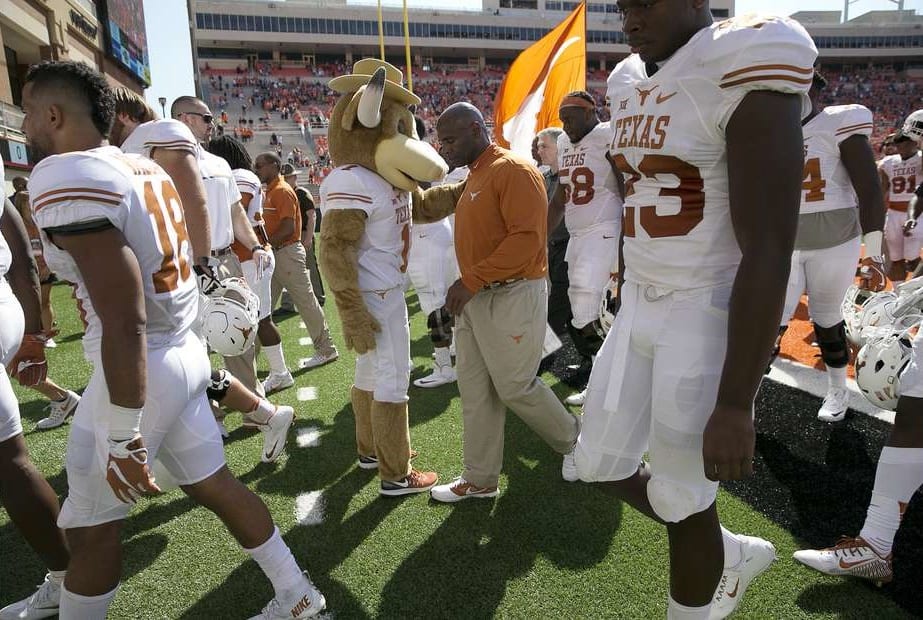 But then his team won a thriller against the No. 10 Notre Dame Fighting Irish to open the season. Chris Warren III and D’Onta Foreman looked like wrecking machines, and Shane Buechele appeared to be the quarterback fans have been dreaming about. The team even reentered the top 25 for the first time in what seemed like an eternity to fans of the Longhorns.

The hot seat had turned cold—but then came another thriller; a shootout against Cal. This time, the Longhorns were on the wrong side of the scoreboard (43-50)—but it’s just one loss.  It isn’t a conference one, so the Big 12 title is still within reach.

But then came yet another thriller and this time it was against a conference foe—the Oklahoma State Cowboys. Once again, it ended with the Longhorns on the wrong side of the scoreboard, 31-49.

Most of it has focused on Charlie Strong. He is the head coach after all and the one ultimately responsible for the success or failure of the program—but it should be centered on defensive coordinator Vance Bedford and special teams coach Jeff Traylor.

For the third time in four games, the defense allowed 40+ points. In all three they allowed over 400 yards of offense, and in two of them they allowed over 500 yards. Powered by Mason Rudolph’s 392-yard passing day, Oklahoma State generated 555 yards.

The reason why is simple—the team tackled poorly, and the secondary did not appear to have any idea what they were doing. Strong commented on both after the game:

“That’s what’s driving me crazy. I said ‘we have them stopped guys, we’re just not tackling” …  just finish, just run through the guy.”

On the secondary’s struggles (SportsDay):

“They’re so concerned about getting blown by that there’s so much cushion [for receivers to work] … I told them ‘just trust your ability guys, don’t be afraid.’ ”

The loss alone was enough for speculation to get started over job security, but it was fueled by a comment Texas AD Mike Perrin made that he needed to evaluate all facets of the football program. Perrin later tried to clarify what he meant (ESPN):

So not just Strong, but everyone. Okay. That’s fair.

According to ESPN’s Brett McMurphy, a source told him that Strong will not be fired during the season and that next week’s game against Oklahoma will be crucial. The source also said Strong would probably be retained, but the defensive staff would have to go.

But let’s be real.

If the important game is next week, and if the defense fails yet again, why would you wait till after the season to fire someone? Why hold onto a coach you’ve already lost confidence in for an additional seven games?

You wouldn’t. If Texas loses and the defense gets blown out of the water by Baker Mayfield and company, Bedford will be fired before the team leaves the field. Strong will keep his job, but his seat will be scorching hot come next season.

Should Oklahoma block an extra point attempt (or a punt or field goal), special teams coach Jeff Traylor shouldn’t bother taking the bus home next week either. Oklahoma State blocked three extra point attempts and even returned one for points. One block can be chalked up to the other team making a play. But three?

Three means the coach dropped the ball in practice and failed to make the necessary corrections during the game.

To be fair, had Chris Warren III been able to play the second half the game could have ended differently. He had 106 yards on ten carries in the first half. It didn’t help when D’Onta Foreman went down in the fourth quarter.

If Texas is going to have a chance against Oklahoma, they need both of those guys to play.