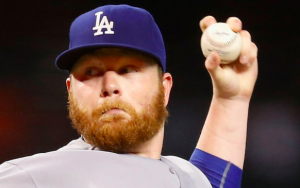 The Chicago Cubs already have one of the better starting rotations in the National League, but it never hurts to try to get a little better. The Cubs have reportedly agreed to a one-year deal with lefty Brett Anderson. The deal reportedly has a base salary of $3.5 million but could be worth up to $10 million with incentives.

Of course, the agreement with Anderson is not yet official and still pending a physical. For most players, this would be a mere formality, but for Anderson it’s a potential obstacle. Anderson was limited to just four appearances with the Dodgers last season because of multiple injuries. He didn’t make his first start until August after a long recovery from back surgery. Soon after his return, a blister sent him back to the DL. He returned from that issue but did not participate in the postseason for the Dodgers after giving up 15 runs in 11.1 innings of work.

It’s important to remember that Anderson made $15.8 million last season after accepting a qualifying offer from the Dodgers coming off the 2015 season in which he went 10-9 with a 3.69 ERA in 31 starts. Of course, that year has been in the outlier in the lefty’s career. Anderson appeared in just 30 games, making 19 starts, between 2012 and 2014 while pitching for the Athletics and Rockies, suffering a slew of injuries during that time.

Clearly, injuries have plagued much of his career, making him a risky signing, even if he passes his physical. However, Anderson, who will turn 29 next week, showed in 2015 how good he can be when healthy, potentially making him worth the risk, especially on an incentive-laden contract like the one the Cubs have given him.

The Cubs also have the luxury of only needing Anderson to be their fifth starter with Jon Lester, Jake Arrieta, Kyle Hendricks, and John Lackey already locked into rotation spots. It’s been assumed that the Cubs would move lefty Mike Montgomery from the bullpen to the rotation to fill the final spot. However, Anderson would likely take over that spot if the signing becomes official and he’s healthy at the start of the season.

Conceivably, the Cubs would have Anderson and Montgomery compete in spring training for the final spot in the rotation. But given Montgomery’s past success pitching in relief and Anderson’s inexperience in a relief role, it may be difficult for Montgomery to win that competition if Anderson proves himself to be healthy.

Of course, the Cubs know that they can move Montgomery to the rotation anytime if Anderson or any of the other starters suffer an injury. This is particularly comforting for the Cubs, as they don’t appear to have much rotation depth in the high minors. Last season, their four returning starters, as well as fifth starter Jason Hammel, all made at least 29 starts.

Assuming Anderson passes his physical, this is a nice low risk-high reward signing by the world champions. Anderson is a perfect fit for Chicago’s rotation and if healthy gives them five proven, quality starters. If Anderson can’t stay healthy in 2017, the Cubs will still be in good shape without him, and so with this deal the Cubs have little to lose and a lot to gain.