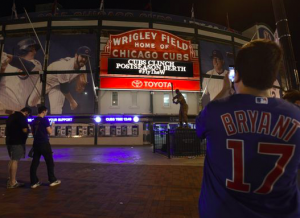 Something that most had assumed since the end of April finally became official early Friday morning: the Chicago Cubs are the 2016 National League Central Division champions. Despite taking a loss Thursday night against the Milwaukee Brewers, the Cubs clinched the division when the St. Louis Cardinals lost to the San Francisco Giants in the early hours of Friday morning. It is the Cubs’ first division title since 2008.

Wrigley Field had emptied out by the time the Giants finished off the Cardinals, so the Cubs will wait to celebrate until after Friday’s game against the Brewers. But in reality, Cubs’ fans have been celebrating the team’s division title for months. The Cubs went 17-5 in April and ultimately won 25 of their first 31 games this season, taking a commanding lead atop the NL Central that was rarely, if ever, threatened by either the Cardinals or the Pittsburgh Pirates.

The Cubs could have easily put themselves on cruise control after the all-star break, but they did no such thing. Chicago kept pushing, going 22-6 in the month of August, setting themselves up to clinch a postseason spot with more than two weeks left in the season. The Cubs already have 93 wins, and even if they play .500 ball the rest of the regular season, they will easily eclipse 100 wins on the season.

Cubs manager Joe Maddon says the key to the team’s success has been their incredible array of young talent, most notably first baseman Anthony Rizzo and third baseman Kris Bryant, both of whom are candidates to win the National League MVP. Of course, the contributions of youngsters like Addison Russell, Javier Baez, and Willson Contreras haven’t been overlooked either.

The offseason additions of Ben Zobrist and Jason Heyward, as well as the return of Dexter Fowler, have helped balance out Chicago’s youth with a strong veteran presence. The emergence of Kyle Hendricks as a potential Cy Young winner has also made Chicago’s pitching stuff much stronger alongside duel aces Jon Lester and Jake Arrieta.

Of course, everyone in the clubhouse agrees that a division is just the first step in the Cubs accomplishing all of their goals. “We have much larger baseball fish to fry in our skillet,” says Maddon.

“We’ve got a lot ahead of us. We really do,” president of baseball operations Theo Epstein said prior to Thursday’s games when Chicago’s magic number for clinching was down to one. “It kind of all boils down to how you perform in October.”

The Cubs will no doubt enjoy their celebration Friday night, but they will soon have to refocus their attention on the postseason. The Cubs no doubt have a bad taste in their mouth after getting swept at the hands of the New York Mets in last year’s NLCS. Still, there is great confidence in this year’s team to erase that memory and take home the Cubs’ first World Series championship since 1908.

“[In the postseason] it’s about rising to the challenge and momentum, and playing your best in the biggest spots and getting your breaks,” says Epstein. “It’s a combination of talent, skill and timing, and there is truly no other group I’d rather go into October with. We’re set up to fight those battles.”