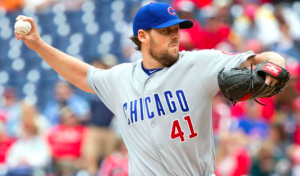 At times this season, the Chicago Cubs have appeared to be virtually unstoppable. They will soon find out if injuries to key members of their pitching staff will slow them down. The Cubs announced Friday that starting pitcher John Lackey and reliever Hector Rondon are both going on the 15-day DL after each underwent an MRI on Thursday. Lackey’s MRI revealed a shoulder strain, while Rondon was diagnosed with strained triceps.

Despite throwing 6.2 scoreless innings in his last start Sunday against the St. Louis Cardinals, Lackey complained of shoulder stiffness, possibly due to warming up to possibly come in during a pair of recent extra-innings games. He will be placed on the DL retroactive to Monday. Lackey was scheduled to pitch again on Saturday against the Colorado Rockies. Instead, lefty Mike Montgomery will step into that spot in the rotation. Montgomery started two games earlier this season while with the Seattle Mariners.

As for Rondon, he last pitched Wednesday following a 12-day layoff, throwing a scoreless inning of relief against the Milwaukee Brewers. His MRI revealed no serious damage, but the Cubs worry that he could exacerbate the injury by continuing to pitch with it. Rondon has 18 saves on the season, but he was moved to a setup role when Chicago acquired Aroldis Chapman.

Rondon becomes the third Chicago reliever to land on the DL this month. Newly acquired Joe Smith was put on the DL Wednesday due to a hamstring strain, while Pedro Strop was lost to a torn meniscus last week and is expected to miss four to six weeks, potentially keeping him out until the end of September. With Rondon joining Smith and Strop on the DL and Montgomery moving into the rotation, the depth in Chicago’s bullpen in front of Chapman is bound to be tested in the weeks to come.

Replacing Montgomery and Rondon in the bullpen will be lefty Rob Zastryzny and righty Felix Pena. Neither pitcher has made their big league debut. Zastryzny has made 23 starts and one relief appearance between double-A and triple-A this season. According to MLB.com, he’s the 20th best prospect in Chicago’s farm system, possessing a good fastball-changeup combination. Pena is a hard thrower who has spent the entire year pitching out of the bullpen in triple-A. He’s the 25th ranked prospect in the Cubs farm system, and possesses a mid-90s fastball and an average slider.

With a 13-game lead atop the NL Central, there’s little chance of the injuries to Lackey and Rondon derailing Chicago’s postseason hopes. However, home-field advantage in the National League playoffs is not yet secure, and perhaps more importantly, the Cubs would prefer not to lose the positive momentum they’ve been building all season. The Cubs certainly have the rotation depth to manage a couple weeks without Lackey, but with the slew of recent injuries, bullpen depth could be a potential weakness heading down the stretch.