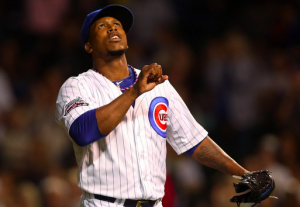 In the years to come, the reigning world champion Chicago Cubs figure to do whatever they can to keep the roster that won that championship intact. That includes both star players and supporting cast. On Friday, the Cubs locked up one of their support players, agreeing to a contract extension with setup man Pedro Strop. The deal will pay Strop $5.5 million this season, $5.85 million next season, and includes a club option for the 2019 season worth $6.25 million.

The 31-year old Strop first came to the Cubs during the summer of 2013. He was part of the same trade that sent Jake Arrieta to Chicago. Since that trade, Arrieta has turned into one of the team’s best starting pitchers, while Strop has become one of its most reliable relievers. Strop has posted an ERA under 3 in each of the last three seasons with the Cubs, pitching primarily in a setup role.

Strop would have been a free agent following the 2017 season. But while he and the Cubs were trying to hammer out a contract for this season without having to go to arbitration, it was clear that both sides had an interest in a deal that would keep him in Wrigley field beyond this year.

“Pedro has been fantastic for us,” Cubs GM Jed Hoyer said Friday. “He’s had three excellent seasons for us, he’s a great teammate, everyone likes being around him. It’s exciting that he wants to be a Cub after this year. He wanted to stay here, he loves it here and we feel the same.”

If Strop could have performed this season the way he has the last three years, he would have put himself in a position to look for a job as a closer on the free agent market next winter. That could have meant a bigger payday than the one he’s getting from the Cubs. But while Strop may strive to be a closer one day, staying with the Cubs turned out to be more important for him.

“I just feel happy that I know I’m going to be here,” Strop said. “I don’t care about the role or whatever. I like to win better than roles.”

Of course, Strop may actually be able to compete for the closer’s job this time next season. Wade Davis is set to be Chicago’s closer this season, but if he signs elsewhere as a free agent next winter, the closer’s job could be open for either Strop or Hector Rondon heading into the 2018 season.

With Aroldis Chapman leaving this past winter after spending half a season with the club and Davis possibly only in Chicago for one year, the Cubs look at the extension for Strop as a way to help stabilize their bullpen long term.

“We don’t want to be in a position of always having to rebuild the bullpen,” Hoyer said. “Pedro’s been a rock for us down there. His pitching is a big part of why we wanted to bring him back. But it’s also who he is. He puts every person around him in a better mood every day. This guy’s always beaming. He’s always in a great mood. But under that huge smile, he’s an awesome competitor, and this guy wants the ball in the biggest spots. We want more guys like that.”

Both sides are clear winners in this extension. Strop wanted to stay with the Cubs and will now get a chance to remain with the team for at least two more years. Even if doesn’t become the team’s closer, Strop will remain an important part of Chicago’s bullpen, which is great news for the Cubs, as they try to keep the core of their championship team intact.