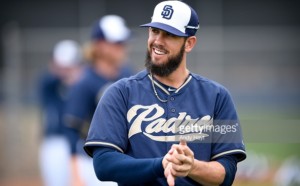 A trade that has been rumored to be in the works for over a week came to fruition on Saturday, with the San Diego Padres sending pitching James Shields to the Chicago White Sox in exchange for pitcher Erik Johnson and shortstop prospect Fernando Tatis Jr.

Money was a huge issue in the trade, as Shields signed a four-year, $72 million contract with the Padres prior to the 2015 season. After San Diego tanked the 2015 season, that contract became something the Padres were eager to get off their books. It’s been reported that the White Sox will take on between $27 and $31 million of the $58 million remaining on his contract, with the Padres picking up the rest, which amounts to roughly half of what Shields is still owed. Of course, Shields does have an opt-out clause he could exercise after the season, which would obviously alter the money being exchanged, but that seems unlikely at the moment.

The White Sox had been pursuing a deal for Shields for quite some time and were motivated to get a deal done before other teams got involved closer to the trade deadline later this summer. “We’re pleased to add a starter of James Shields’ caliber,” White Sox general manager Rick Hahn said. “He has proven to be one of the most dependable and durable pitchers in the major leagues over his career.”

Shields is likely to slot in as Chicago’s No. 3 starter behind lefties Chris Sale and Jose Quintana, who are both having all-star caliber seasons. After the deal was made official, Sale voiced his approval of it. “You have to have a lot of respect for him. It’s not easy,” said the White Sox ace. “You don’t just roll out of bed and throw 200 innings. For him, it seems like it’s that way. You know, it just takes stress off everybody else. It takes stress off the next starting pitcher. It takes stress off the bullpen, and he’s going to give us some quality innings as well. He’s still got a lot left in the tank, so we’re looking forward to that. Like I said, hopefully that’s the spark we need.”

This season, Shields is 2-7 with a 4.28 ERA, although that ERA is a bit inflated after he allowed 10 runs in 2.2 innings in his most recent start, perhaps distracted by the trade talk surrounding him. Assuming that his most recent start isn’t a sign of things to come, Shields will give the White Sox an impressive trio at the top of their rotation, one that should serve them well as they fight to get back on top in the AL Central. Not long ago, Chicago was comfortably on top of the division, but at the moment the White Sox are in third place and two games out of first place in what figures to be a four-horse race within the division.

In addition to freeing themselves of half of Shields’ salary, the Padres acquired Johnson and Tatis Jr. in the deal. Johnson has bounced back and forth between triple-A and the majors since 2013; he’s expected to fill in for Shields in San Diego’s rotation. Johnson has a 6.94 ERA with the White Sox this season. Tatis Jr., the son of former major leaguer Fernando Tatis, is the biggest part of the deal for the Padres, despite being 17 and yet to make his professional debut. The White Sox signed Tatis Jr. for $700,000 last summer, and he is years away from reaching the majors.