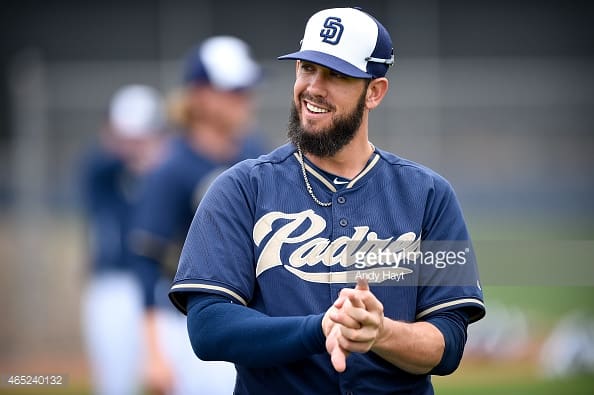 Multiple reports indicate that the Chicago White Sox are interested in acquiring starting pitcher James Shields and that they have had conversations with the San Diego Padres about a possible trade. One report indicated that talks between the White Sox and Padres have “significant momentum,” although it’s unclear if a trade could be worked out any time soon.

Obviously, it’s a little early in the season to expect a big-name player to be moved, but the Padres are already 10 games under .500 and 10.5 games out of first place in the NL West. San Diego signed Shields prior to the 2015 season as part of a spending spree they hoped would take them to the postseason. However, after falling flat last year, the Padres have had to part ways with several notable players and are clearly in rebuilding mode, so trading away Shields would make sense.

Shields is making $21 million this year, and he will make the same each of the next two seasons, with a $16 million option or $2 million buyout for the 2019 season, so the Padres would certainly be interested in freeing themselves of that contract. Shields does have the choice to opt out after this season, but it seems unlikely for the 34-year old to make more than $21 million per season on the open market this winter.

The White Sox have made it no secret that they are interested in winning right now. Chicago has lost 13 of its last 17 games, including five in a row, causing them to fall out of first place in the AL Central. However, the White Sox are very much in contention this season and a pitcher like Shields could make a difference during a playoff race the second half of the season. Shields is just 2-6 this year, but he holds a 3.06 ERA after 10 starts. With Chris Sale and Jose Quintana at the top of their rotation, the White Sox would only need Shields to be their No. 3 starter, giving them a formidable rotation.

It’s unclear what the White Sox would have to give up in order to acquire Shields, as it may depend on how much money exchanges hands. San Diego would like to free themselves of Shields’ salary, but the Padres may still have to pay some of his remaining contract if they were to trade him. The White Sox don’t have a particularly deep farm system, but it’s been rumored that Chicago may be willing to part with shortstop Tim Anderson, one of the organization’s few elite prospects.

However, while the White Sox have been reportedly linked with Shields, they may not be the only team with interest in acquiring him. There’s no pressure on the Padres to trade him right now unless they get an offer from the White Sox that’s too good to turn down. San Diego can always wait until later in the summer when the trade market heats up, as several teams could have interest in Shields, potentially creating a bidding war involving multiple teams.